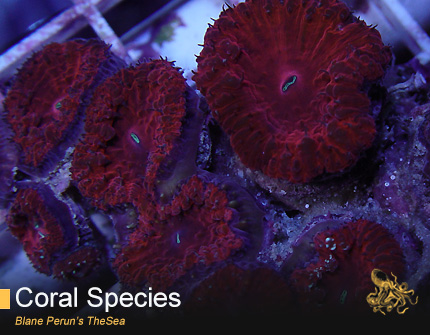 The red blastomussa is not much different than the green with the exception of lighting. Maintaining intense red coloration would require a bit more light as the blue end of the spectrum, not enough and the coral will look more brown. Red is very common color for the blasto, but it is more of a deep mauve. Blood red and indigo do exist but they are much more rare; with the correct lighting however one could coax more intensity from the algae.

(Some types of the red blastomussa wellsi will be monochromatic hues of red, but this is not as common.) Red blastomussa inhabit waters all over the world, but specifically from the Central Pacific to Indian Ocean and occasionally the Red Sea. Sometimes called Branched Cup, Pipe, or Pineapple Coral, the red coloration can be found in both species of wellsi and merletti.

Identifying between the two is an easy surmise- simply analyzes the size of the polyps, as the blastomussa wellsi has significantly larger polyps than its relative, the merletti. There are other differences between the two as well. The wellsi polyps will be shaped asymmetrical and contain large corallites (8-15mm diameter), versus the red merletti symmetrical shape and small corallites (6-8mm diameter). The polyps of the red blastomussa are nocturnal, and its tentacles will extend nightly for feeding.

Blastomussa acquire food in two ways- through relationships with tissue-based algae and plankton. The first process is photosynthesis, which this minute algae, called zooxanthellae, creates nutrient from light, carbon dioxide and nitrogen. The energy developed from this process is transferred to the blastomussas polyps and consumed by the coral, whose waste products in turn feed the algae. This cycle continues repeatedly and is a mutually beneficial relationship for both the zooxanthellae and the coral colony.

As a secondary and supplemental food source, the coral consumes a variety of organisms that pass through via the ocean currents. The red blastomussa coral is covered in a sticky layer of skin tissue that traps the floating plankton, similar to flies and other insects in a spiders web. Because the tissue of the coral is extremely flexible, it will contort its body in many directions to push the trapped organisms into its mouth in the center of the polyp. In a home tank, the coral will need to be fed a regular diet of zooplankton to make up for the lack of true photosynthetic opportunities it may get in the wild.