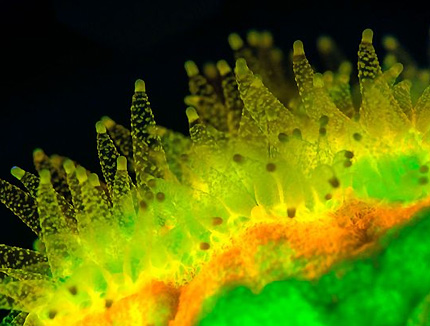 When you look at a coral reef, the most striking feature and at the same time the quality that attracts the eye the most is the bright, beautiful and varied coloring of the coral formation. Many people think that corals are colorful in themselves, but this cannot be further from the truth – here are some amazing facts about how and why coral reefs become so beautifully colored.

Coral polyps being transparent, they need pigments coming from an external source to become colorful. This external source is actually a very internal one – they get their bright hues from the zooxanthellae algae that live inside them. These microscopic algae fulfill multiple roles. They provide not only the coloring pigments, but also the compounds the corals need for survival – that is, they provide most of the food for the polyps. The relationship between the coral and the algae is a very close, symbiotic one: the polyps provide the sheltered environment the algae need to be able to photosynthesize and, in return, the algae supply the polyps with the carbohydrates they need to survive. The pigments are practically by-products of the photosynthesis that the algae engage in.

Zooxanthellae algae are varied in terms of coloring. Most of them are of a yellowish-brownish color, lending their hosts the same hue, but the pigments they produce vary in color based on the amount of sunlight they get, as well as based on other features of the specific area of seabed they live on. When the light they get is very intensive, the algae tend to intensify their photosynthetic activity, too, which may lead to an increase in the amount of oxygen they produce. Too much oxygen may be harmful for the coral and, as a means to protect itself, the polyp may expose some of the algae, which results in lighter coloring.

Coral reefs are very colorful formations, the following being the most common hues:
Red and orange – probably the most common coral colors of them all;
Black – many coral species have black or dark brown skeletons, often paired with tips of a different color;
Pink – this color appears when red or orange corals fade;
Blue – a very rare color in nature in general; blue corals are also very rare and strikingly beautiful!

We already know that corals get their colors from the billions of algae they live with, but there is still a lot to find out about the actual mechanism of pigmentation. If you take a look at a coral community, you will see that corals belonging to the same species and living in the very same area, getting the same amount of light and probably being inhabited by the same amount of algae still display different colors. One of the ways scientists are trying to account for these differences is by examining the genetic material of the polyps in search of differences, but there is still a lot we don’t know about the color polymorphism of the otherwise translucent coral polyps.