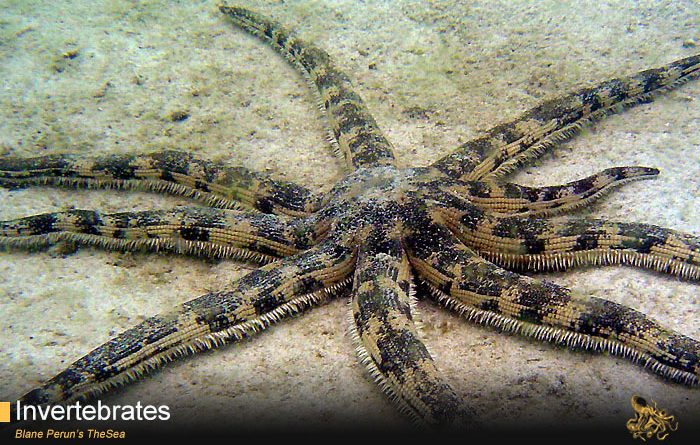 Although the sand sifting starfish is known for eating detritus, it is actually an omnivore. Also known as Astropecten polyacanthus, it has the unique ability to eat just about all the fauna in its habitat. This quality is also the one responsible for the starfish’s distinctive name. The bland-colored sea star is known for the ability to burrow through the sand on the seabed and slowly move across it in search of food. This species of starfish is also quite fragile, requiring specific conditions in order to thrive. As a result, it is mostly found in certain regions of the Indo-Pacific, and it can easily be affected by changing weather patterns and lowered water temperature.

This omnivore is able to consume detritus and microfauna in a unique and fascinating manner. Not only does it eat everything off of the rocks and sand it comes across, but it also has a healthy diet consisting of clams, worms, algae and various other organisms. Bivalve and gastropod mollusks are also on its menu, which the sea star tends to consume by swallowing whole.

The peculiar behavior of the sand sifting star is one of its most characteristic traits. The starfish is a peaceful organism that feeds on the tiniest of creatures and never bothers fish or any of the larger animals that get close to its habitat. Additionally, this creature is slow moving and can easily be picked up by natural predators such as pufferfish, despite its potent natural defenses. Divers can normally find the sea star at shallow depths, although it has also been spotted over 180 meters below the sea surface.

The sand sifting starfish only comes out at night, and it is a fragile animal as a result of its biology. This is the main reason why this sand sifter cannot survive for long in lower salinity waters, which can reduce its lifespan to a considerable extent. The sea star is also quite large, featuring an arm span of over 20 cm, and its either bland or bright yellow and orange colors are distinctive alongside its sharp spines. Although it can be rather fragile, the sand sifting starfish does not lack defenses; its body contains a potent neurotoxin known as tetrodotoxin, which has no known antidote.