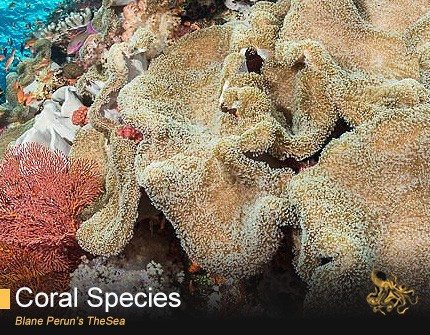 With more than 40 species of soft corals belonging to it, the Sarcophyton genus is among the largest in the coral world. The species in the genus are also known as toadstool corals or toadstool leather corals and they are widespread in the Indo-Pacific region, around South Africa and in the Red Sea.

These soft corals derive their name from their appearance. They are attached to substrate by a thick stalk that spreads into a cap at the top. The corals in younger colonies resemble mushrooms, getting their characteristic appearance only later on during their life. Mature corals usually have polyps, with tips of a color that is different from the rest of the body. The polyps are long, in some cases even as long as 2″, but they are not visible all the time – sometimes the coral retracts them, closing its cap to look like a smooth-surfaced ball. Sacrophyton corals can grow quite large, some of them measuring more than 24″ across. Females can be three times the size of males.

Toadstool corals vary in color – the majority of them are tan and brown, but yellow and purple specimens are not uncommon either. The polyps can be of a color different from the color of the cap or the stalk.

These corals prefer shallow waters, having up to 30 meter in depth, and moderate, but continuous water flow that keeps the polyps in permanent motion.

Sacrophyton corals are photosynthetic corals, which means that they get their nutrients with the help of the microscopic algae that they provide shelter to inside their bodies. Unlike other coral species, toadstools do not have tentacles they could use for feeding, so they do not capture food particles from the water around them.

Corals belonging to the genus can reproduce both asexually, by means of fragmentation, or sexually. Unlike other coral species, toadstools may adopt a technique that is almost unique to them and that is shedding a piece of the cap as a way to propagate. The process may leave wounds behind, but they heal relatively quickly. The fragments released by the mother colony will then travel through the water to find a suitable area of substrate to attach to and will start building the new colony.

Toadstool corals are attached to the substrate and lack any kind of stinging capacity. Even so, they are not left entirely vulnerable: they can produce toxic compounds that they release when they want to ward off other animals, and therefore they are considered moderately aggressive.
Another interesting form of behavior noticed especially in the case of yellow toadstools is the retraction of the polyps followed by the release of a waxy substance that covers the body of the coral. The coral remains in this state for a few days, after which it extends its polyps again. The reason for this behavior displayed by Sacrophyton corals is not currently known to scientists, but it does not seem to indicate a health problem or the presence of a threat.