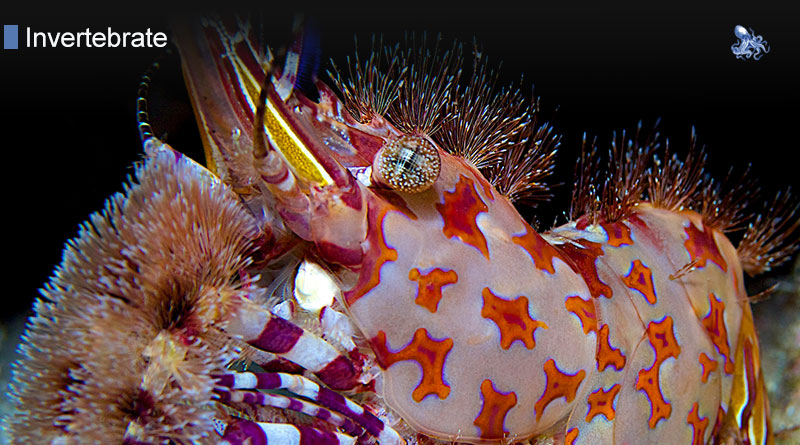 The saron shrimp, also known as the common marble shrimp or Saron Marmoratus is a color changing, nocturnal shrimp that is found in tropical waters where it rests amongst coral and sifts through sea floor detritus at night. Males and females carry different colorings, but both species change their coloring at night in order to make them less visible during their vulnerable feeding period when they are exposed and out in the open. They are indigenous to the tropical waters of East Africa, stretching to Polynesian islands of the Pacific Ocean.

The saron shrimp is known for its ability to change color, a rare trait among decapod crustaceans of this variety. During the day, it is usually brown with dark green spots covering the upper portion of the carapace and abdomen. The legs are often a darker brown, with small, speckled white bands covering them at various symmetric locations throughout the leg’s length. At night, the shrimp’s body turns a deep wine-red that helps it blend into the dark and protects it from predation from flatfish, herring and other common predators that are looking for it.

This type of shrimp is a nocturnal bottom feeder that will leave its coral habitat or rocky undergrowth at night to sift through the sands of the sea floor looking for organic detritus, plankton and other food sources that it can eat. It has been known to scavenge the sunken carcass of larger fish that fall through to the bottom of the sea floor as well. The feeding range of the saron shrimp does not exceed 12m in depth, and it tends to remain in its most comfortable environment in shallow tropical reef waters.

The saron shrimp is not hermaphroditic like many other shrimp species, but does not tend to mate for life. The most visible difference between the males and females of the species is the presence of a male decoration along the back of the carapace. These decorations are called cirri, and look like plumes of feathery material that embrace the outer edge of the back of the shrimp towards the abdomen. Males also usually have longer walking legs than females, the biological importance of which is currently unknown, although it is possible that this characteristic is designed to make the shrimp more visible to potential mates.