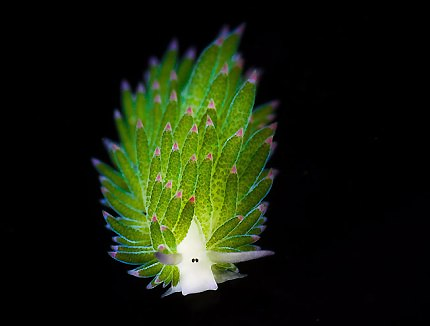 Sea slugs aren’t actually a particular group of animals, as the name is often used for a variety of marine sea snails of different phylogeny. What they share in common is the fact that they appear not to have an outer shell, as some either shed it before maturing, while others have an internal shell.
The term sea slug is often used for several groups of marine gastropods, the most common being nudibranchs and sea hares. “Sea slug” may also refer to other groups of snails that are not gastropods, such as sea cucumbers, which are actually echinoderms, closely related to starfish.

The most common usage for the term “sea slugs” is to name a nudibranch, which is a group of gastropod mollusks that live only in the marine environment. They are all soft bodied, as they shed their outer shell after they have passed their larval stage. With over 3,000 described species, nudibranchs are some of the most colorful and diverse mollusks in the ocean. They occupy seas worldwide, from the tropics to Antarctica. They live at all depths of water, and they widely range in size, form and color. Their common characteristic is that they live on the bottom of the ocean, so besides a few exceptions, they are all benthic animals.

Another common characteristic of nudibranchs is that, contrary to many other gastropods, they share a bilateral symmetry. Another characteristic is that most of the species are rich-colored. Some have colors that allow them to better camouflage themselves in their environment, while others possess vivid colors that warn predators that they either taste bad or that they are poisonous. Some nudibranchs have nematocysts, just as jellyfish have, which are tiny cells that sting when touched. Nudibranchs also greatly range in size, going from 20 mm to over 600 mm.

The term sea slug may also be used for sea hares and sea cucumbers. Sea hares are also marine gastropod mollusks, and they possess soft internal shells which are made of protein. Sea hares have their names due to their round shape and two rhinophores on the head structure, which makes them look like hares.

Sea cucumbers aren’t gastropods, but echinoderms, which are some of the most evolved forms of mollusks. With leathery skins and elongated bodies, they resemble the shell-less sea snails, which is probably why they are also commonly referred to as sea slugs.