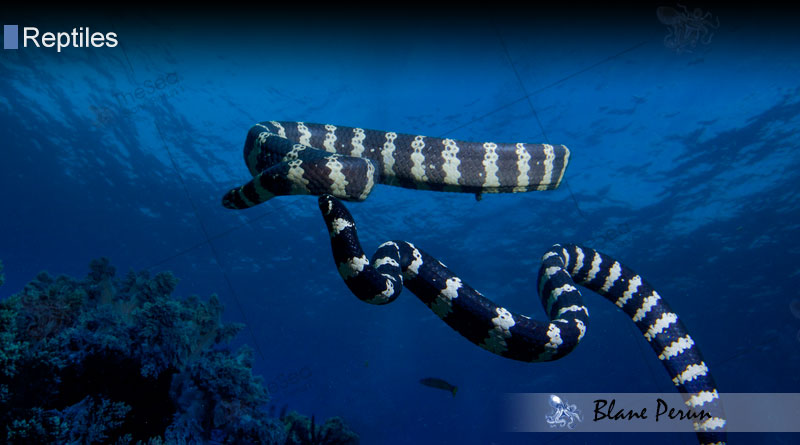 Sea snakes are reptiles of extraordinary hardiness and adaptability. These aggressive creatures not only protect themselves by biting and releasing the deadliest venom of all snakes, but they also have features that allow them to survive under the harshest circumstances and to find food where no other animal can.

Sea snakes belong to a family of venomous elapid snakes. They are reptiles and have lungs, which means that they need to have access to air regularly. Even though they spend most of their time in the water, they must be able to come to the surface to breathe.

The diet of sea snakes consists of octopods, eels, fish eggs that they find on coral reefs and under rocks on the sea bed and small fish. They occasionally take deep dives in the sea and, even if they need to come to the surface to breathe, they are able to spend a relatively long time underwater without breathing – the sea snake can spend 2-3 hours in the water on end, holding its breath. This is possible because of the snake’s special, elongated lung that extends over almost the entire body, the slowness of its metabolism that makes it possible to survive on very little oxygen, and the snake’s ability to breathe through the skin.

The elongated lung and the ability to temporarily stop breathing are not the only features that help sea snakes adapt and survive. The body of sea snakes is more flattened than the body of terrestrial snakes, their nostrils are valvular and located on the top of their nose, and their tails are relatively short and shaped similarly to an oar. The nostril valves seal the nose of the snake perfectly, making sure that no air leaves and no water enters the body of the animal while underwater. The scales that cover the body of sea snakes also display modifications that have emerged as the result of the adaptation process: some species continue to have scales on their belly, but they are very small, while other species lack belly scales completely, which makes them completely unable to crawl on land. Another distinctive feature of the sea snake is the existence of the salt gland, a small organ above the nose that eliminates the excess salt that the animal ingests.

Snakes have evolved from larger reptiles during the Jurassic Period, roughly 135 million years ago. The first snakes lived in the seas, but the sea snakes that we know today are actually the descendants of land snakes that had evolved from the first sea snakes. Current species have developed when the snakes that inhabited the land took to the sea in search for food and remained in marine habitats, adapting to the special circumstances they encountered there and becoming the hardy creatures they are today.