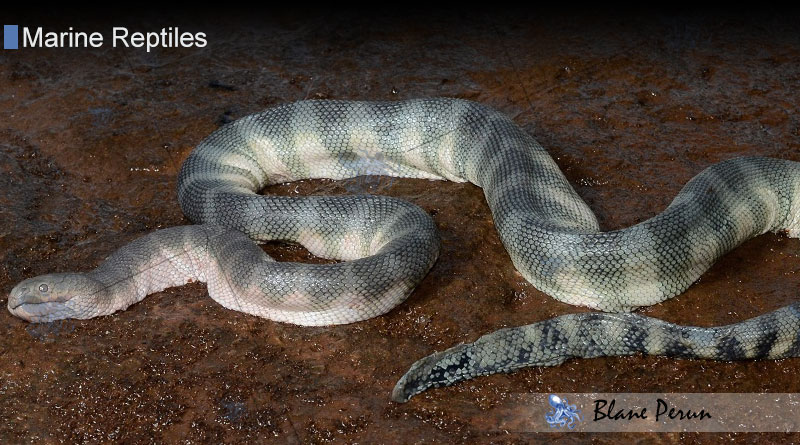 The beaked sea snake, also known as the hook-nosed snake or the common sea snake, is a marine snake and perhaps one of the most venomous of its kind. This snake is implicated in many bites, sometimes accounting for as many as 50 percent of all bites, as well as the cases of envenoming and fatalities.

Known by the scientific name of Enhydrina schistose, this snake belongs to the Enhydrina family of the Elapidae family comprised of venomous snakes in tropical and sub-tropical regions such as cobras, mambas and other sea snakes.

These sea snakes have scales that are longer than wide and come in contact by 4. The rostral scales, or the ones at the front of the head or the nose, are long and these give the snake the beaked appearance. These snakes usually reach 1.2 meters in size.

The toxicity of this snake is among the highest in sea snakes. The venom of the snake contains both neurotoxins and myotoxins. The neurotoxins act by destroying nerve cells or enabling them to transfer ions, thus rendering the prey unable to move. Myotoxins are a form of peptids which act by destroying muscle cells and cause necrosis, leading to paralyzing the prey. It is estimated that just 1.5 milligrams of venom is lethal to humans, with the average yield for each bite ranging from 7.9 to 9 mg. The median lethal dose or LD50 is of 0.1125 mg per kg.

The beaked sea snake can be found from the Arabian Sea and Persian Gulf to Madagascar, South Asia seas, as well as Australia and New Guinea. This snake predominantly inhabits the coast and the coastal islands of India alongside 20 other sea snake species that are common in the area.

These snakes have been reported to be aggressive and even “savage”, especially when provoked. This combined with their highly potent venom make this snake responsible for over 50 percent of sea snake attacks as well as for as much as 90 percent of deaths from sea snake bites. These snakes are active both during the day and night. Their special adaptations enable them to dive at depths of over 100 meters where they can spend as much as 5 hours. Among these special adaptations are some special glands that allow the snake to eliminate all the excess salt from the sea water. They feed mainly on fish, which they paralyze using their potent venom. The short teeth of the beaked sea snake is of no more than 4 mm means that it has to use venom all the time to render the prey unable to move, before it can disjoint its jaws and swallow it whole.

Female sea snakes can give birth to up to 30 snakes each time. However, the young face many dangers until they mature, with only a small percentage of them reaching adulthood. Despite their potent venom and aggressiveness, beaked sea snake adults also face many perils from predators such as large fish or crocodiles.