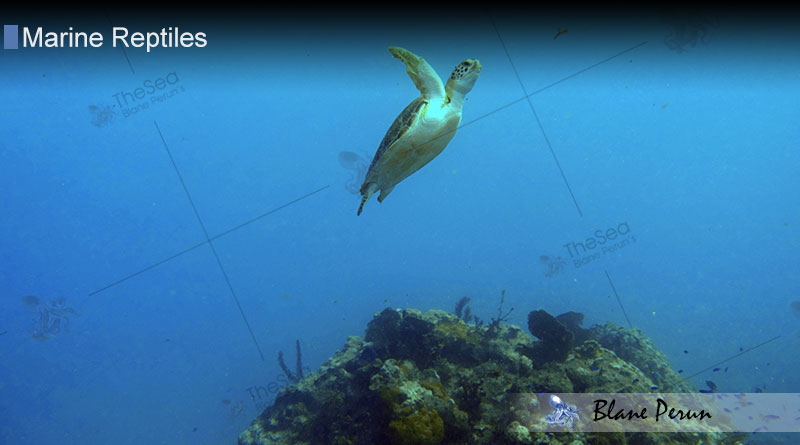 The deep sea is a special and very harsh environment for a number of reasons, one that only the hardiest creatures of the sea can dive into. However, diving deep, to the deepest layers of the ocean is no problem for sea turtles – these amazing creatures have sturdy and adaptable bodies, their incredible ability to survive even among the harshest surroundings makes it possible for them to go deep down and find the food they need.

They probably take such deep dives in search for food. Most sea turtle species are omnivorous, feeding on anything from small fish, sponges, worms, mollusks, decapods, to even seaweeds and sea grass. While most of the animals they prey on and all the marine plants they eat are found in the shallow waters, some of the species that serve as food for sea turtles, such as certain species of jellyfish, live in the deeper layers of the sea, making the turtles dive after them. It must be noted, though, that most jellyfish live in the top 1,000 feet layer of the sea and this is the layer that sea turtles spend most of the time in. The reasons that make them take dives deeper than that layer might include motives other than the search for food, such as the search for refuge from predators that would not go that deep. Deep dives might also serve thermoregulatory purposes – hunting increases the turtle’s body temperature and they dive deep to cool down.

Though most sea turtles are indeed omnivorous, some of them specialize in certain prey, and the depth that prey lives at determines the depth to which the turtle is willing to go. Leatherback turtles feed almost exclusively on jellyfish and they are certainly the ones that are able to dive the deepest. As some jellyfish species are known to dwell the sea bed at depths that no human has ever been able to reach and leatherback turtles just love them, they are willing to dive for them.

Sea turtles – especially the champions of deep diving, leatherback turtles – have adapted to the conditions they must endure deep down. They store oxygen in their muscles and in their blood and they have collapsible lungs. Their shells are also flexible, allowing them to endure the increased pressure and they are able to function at slower heart rate, which makes it possible for them to store more energy and to use the energy stored more economically. Turtles breathe air into their lungs, which means that they need to be able to come to the surface every now and then, but they are able to hold their breath for hours on end, allowing them sufficient time to dive deep, catch their prey and come back to the surface.

Sea turtles can dive more than 1,000 feet, the deepest recorded dive being around 1,230 meters – that is more than 4,000 feet. The plunge was taken by a leatherback turtle in the North Atlantic.