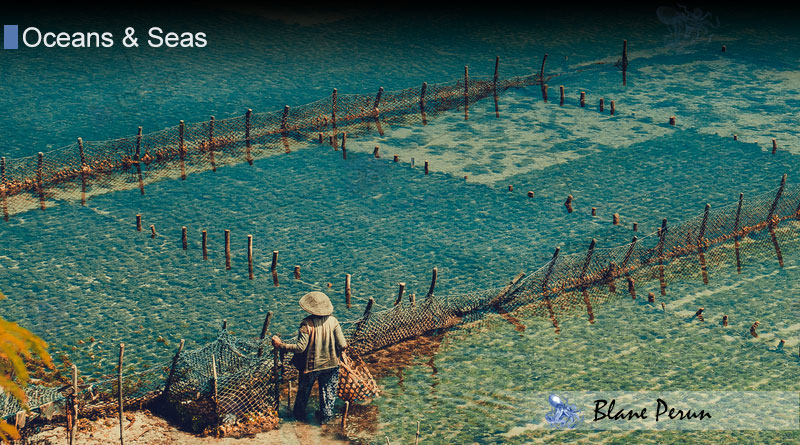 Seaweeds, these colorful and diverse marine algae are among the most important forms of life on Earth. The term seaweed does not refer to a single species; it is much rather the common name for a huge range of marine and freshwater species that form the very base of aquatic food chains. They serve not only as sources of nutrition for numerous creatures of the sea and the ocean – they, indeed, also produce oxygen, to answer the question shortly. Now, let’s dive a bit deeper to find out more about seaweeds.

Seaweeds look like plants, but, as a matter of fact, they are single celled or multi-cellular algae that join and create plant-like formations in aquatic habitats.

The family of seaweeds includes several thousand different species of marine algae, the most common types being brown algae, red algae and green algae:
Brown algae are the largest of them all. They bear the strongest resemblance to land plants, with long stems and roots that they use for anchoring themselves to the substrate. They prefer both arctic and temperate waters, so they are very widespread;
Red algae need the blue light of the deep sea to be able to extract the nutrients they need and to release oxygen, so these species are found in areas further from shorelines;
Green algae – these species live not only in the seas and oceans. They are widespread in freshwater habitats as well; some of them even live and thrive in moist soil.

Seaweeds produce oxygen through photosynthesis, a complex process that enables these algae to harness the energy of the sun and to transform it into chemical and electrical energy. In the presence of sunlight, seaweeds transform carbon dioxide and water into carbohydrates, mainly glucose and oxygen. The glucose is then used by the seaweeds as nutrient, process during which oxygen is released as a byproduct.

Marine species, including seaweed, produce as much as 70-80 percent of the oxygen in the atmosphere of the Earth – scientists estimate that algae produce an astonishing 330 billion tons of oxygen a year. More than 70 percent of the Earth’s surface is water, and only about 30 percent is land. This also means that land-dwelling species alone would not be able to supply the quantity of oxygen that life on Earth requires – without the oxygen produced by marine species, mainly seaweeds, life would not be possible on our planet, which makes algae (and, among them, seaweeds) crucial contributors and facilitators of all existence on Earth. Therefore, the question “does seaweed produce oxygen?” can be answered with a resounding “Yes, it actually produces most of our oxygen!” These plant-like life forms comprise more than 7,000 different species, widespread in seas, oceans, rivers and lakes all over the world, forming a huge and very important biomass and making it possible for all creatures on earth to breathe and, therefore, to live.