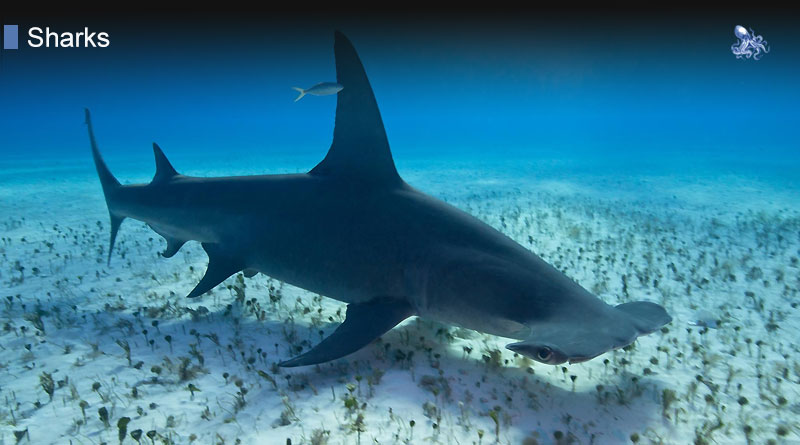 The world’s seas and oceans can be taken for one huge shark habitat. Sharks are so resilient, so adaptable and they have so few predators that they have become widespread in all the salt waters of the world, what’s more, there are a few shark species that have colonized freshwater environments such as large rivers, lakes and estuaries, too.

There are eight shark species that live in freshwater or in the brackish waters of low salinity, where the water of the sea mixes with the water of the river. One of the most studied freshwater shark species is the bull shark, a large species that loves freshwater, especially the shallow waters, and has been frequently spotted in bays, lagoons, as well as in larger rivers. The bull shark is a relatively large species – females are larger, they can reach 2.4 meter in length and weigh around 130 kg, while males are a bit smaller, with length typically around 80 cm. They have come into the focus of researchers due to their behavior – they are territorial and aggressive, attacking anything that enters their territory, but they are not choosy in terms of habitat, mostly preferring warm freshwater areas, but thriving just as well in salt water.

There are numerous shark species that prefer to live in polar waters, where the temperature of the water never rises above 5 degrees C (41 F). The sharks that live in polar waters vary in size considerably – black dogfish sharks are among the smallest species, while pacific sleeper sharks, with their length exceeding 3.5 meters are among the largest shark species of these areas. Greenland sharks are among the most mysterious, and therefore the most studied polar sharks for a number of reasons:
They are the only sharks that can survive and thrive in freezing waters all year;
They are the sharks with the northern-most habitat;
They are among the most long-lived sharks, many of them reaching the age of 200 years;
They are one of the few poisonous sharks, but they are toxic not because they have venomous spines, but because their flesh is toxic as such.

The majority of sharks prefer warm waters or they migrate between tropical waters and milder, temperate water areas. Some waters in the world are extremely favored by sharks – the waters around Costa Rica, for example, provide home to more than 40 different shark species.

Sharks usually prefer shallow waters and are rarely found under 3,000 meters. However, sharks are extremely diverse in terms of diet choices, too; therefore, most species prefer a certain layer of the water. Some sharks, such as the zebra horn shark or the wobbegong are called benthic species because they swim very close to the ocean floor. Some others, such as the basking shark and the great white shark are called pelagic sharks because they prefer the open sea.