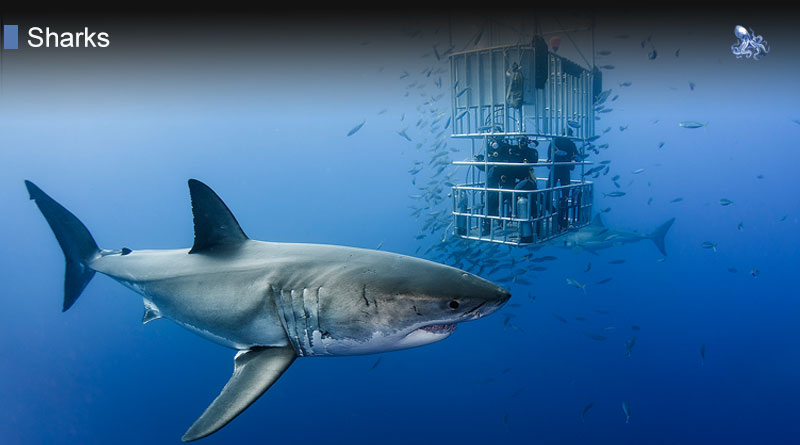 Also known as Great White or even the “White Death,” the great white shark is one of the most remarkable and fearsome predators ever found in the seven seas. Known for growing to an impressive size of more than 6 meters in length, this species of shark is able to reach maturity in about 15 years, and while its life span was believed to be about 30 years in the past, its true life cycle exceeds 70 years. Killer whales are practically the only real predators that can best a great white, and their robust anatomy made for remarkable speed and strength helps great whites outswim and defeat most fish and marine mammals.

With their characteristic gray dorsal area and white underside, great whites can easily be distinguished from other sharks. Other distinct characteristics, such as their sharp, serrated teeth and robust conical stout are also notable features, when comparing them with other species of sharks. Their most significant trait, however, is their massive size. Male great whites can grow to 3-4 meters in length, while females can be even larger. Only a few species of fish, such as the whale shark, the giant manta and the basking shark are overall larger and heavier than this species.

Almost all coastal areas that have water temperatures ranging between 12 and 24 C are home to great whites. The highest concentrations of these species of shark can be found in the waters of the United States, Japan, Oceania, Chile, South Africa and the Mediterranean Sea. Probably the greatest number of sharks to live around a single island in the entire world, however, is Dyer Island, in South Africa. Great whites are usually found in areas where large game can be found most easily – such as seals and large fish – and they are also known to migrate between coastal regions, traveling thousands of kilometers, while changing their behavior to adapt to the new environment quite easily.

Most of the time, great whites are known to feed on fish, such as tuna, mantas and even other sharks. Juvenile great white sharks in particular tend to feed on smaller fish, while larger specimens have also been known to attack larger creatures, such as northern elephant seals, which can grow to sizes considerably larger than the shark itself. In rarer cases, great white shark bite marks were even found on juvenile sperm whales, and it’s not uncommon for these sharks to attack different species of whales and dolphins, including dusky, humpback and Risso’s dolphins, as well as beaked whales and pygmy sperm whales.

A recent study conducted by scientists in 2007 has shown the full power of the great white’s bite force using a highly detailed analysis of the animal’s skull. Measurements revealed an impressive bite force of about 18,000 N, or more than 1,830 kilograms of force, equal to the weight of a large car or midsize SUV. Despite the fact that White Death attacks are some of the most prevalent among all shark species, in most cases, a great white shark will not pursue to its prey after the first bite, due to the simple fact that the human body’s high ratio of bone to muscle and fat content is not suited to the shark’s slow digestive process.