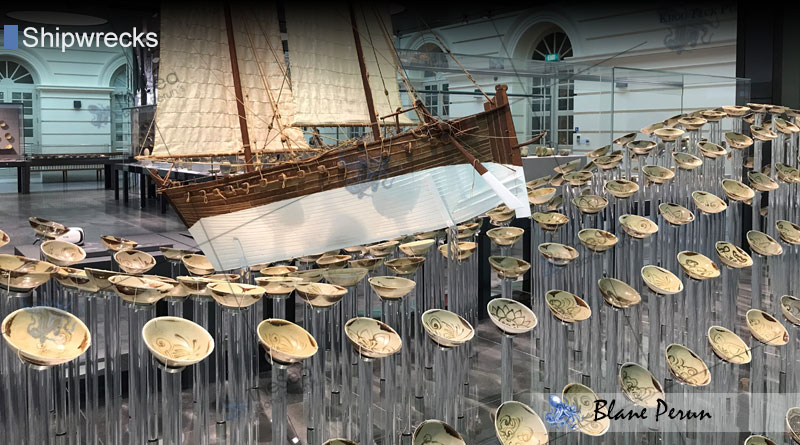 The Belitung shipwreck was discovered off the coast of Indonesia, about 1.6 km off the coast of Belitung Island. The find was that of an Arabian dhow returning from China to Africa on a long journey that was lengthened by the choice of a secondary trade route that was not often chosen by most trading vessels during the period. The ship sank in 830 AD, and its cargo was discovered by fishermen in 1998. It was the first ancient Arabian ship to have been excavated and found to retain much of its structural integrity despite being buried beneath the sea for more than a millennia.

The discovery of the Belitung wreck was of great historical significance in the late 20th century, revealing much about the construction techniques of the Arabian culture of the time. The ship was built around a 50-foot long keel of about 15 cm in thickness – known to have survived intact. Several types of wood were successfully identified to reveal more about the construction of the boat and its relation to similar wrecks discovered in the Red Sea off the coast of Africa. The hull of the shipwreck also revealed an important treasure that dated back to the Tang dynasty of China, and led to the ship being unofficially named the “Tang treasure ship.”

The Belitung shipwreck became primarily famous due to the important cargo it was carrying. The archaeological dig in commenced during the expeditions of 1998 and 1999 revealed the hull of the shipwreck still holding lumps of concretion filled with historically valuable artifacts carried from China. The treasure mainly consisted of finely crafted bronze mirrors, ewers and various ceramics, as well as lead ingots and various gold and silver items. An impressive number of about 60,000 artifacts were uncovered, many of which were displayed for the first time at the ArtScience Museum in Singapore, in 2011.

The wreck is of an extremely important historical significance, since it carries vital information about the trade between two major empires of the period, Abbasid Iraq and Tang China. The dhow reveals startling new discoveries about the maritime Silk Route to China, allowing Archaeologists to answer many questions about the Chinese trade routes of the time, but also uncovering new mysteries. It is still uncertain why the ship took a return route that was more regularly frequented by vessels traveling from the Java Sea. Also, the artwork on some of the artifacts showed a surprising variety of motifs from many different cultures. The Belitung shipwreck cargo has been cataloged in its entirety, but still poses many mysteries associated with the 9th century maritime trade routes from China.