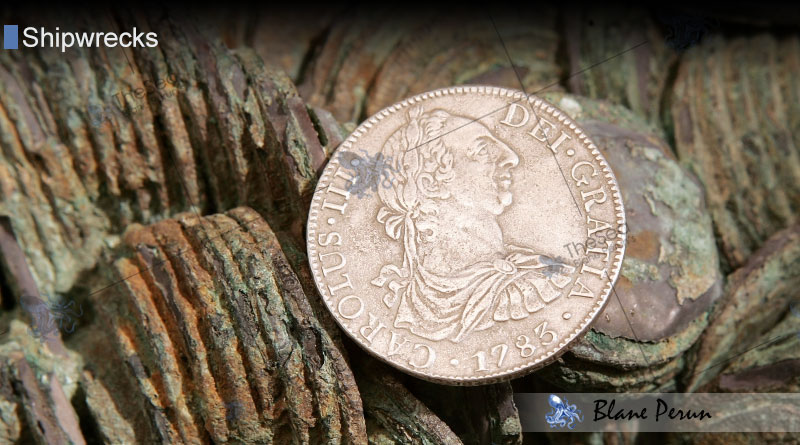 The Nuestra Senora de las Mercedes shipwreck is one of the few real treasure ships that held hundreds of millions of dollars’ worth of silver at the time of its discovery. The ship sank off the coast of Portugal in 1804 and remained hidden from sight for more than 200 years before Odyssey Marine Exploration discovered and retrieved much of the treasure stored on the vessel. The Spanish frigate seemed to have been a center of controversy throughout history, being the center element for an attack by the British in times of peace and still causing the Spanish Government much difficulty even after it was recovered.

Nuestra Senora de las Mercedes was a frigate ship that was discovered in an area fraught with colonial-era shipwrecks. The Spanish frigate had been launched almost 30 years earlier, in 1786 in Cuba. Its crew consisted of more than 300 men, and the frigate was armed with 36 cannons. Sailing from Montevideo to its destination in Cadiz, it was carrying silver, gold, cinnamon, vicuna and quinoa along with several other ships. Due to the unique construction of the ship, the shipwreck remains well-known not just for its treasure, but also for shedding more light on the construction practices and culture of the time.

The vessel was part of a small flotilla together with the Medea, Santa Clara and Fama. The ships were intercepted and attacked by the British during a time of peace between the two nations, and the Mercedes was immediately sunk as the very first shot hit the ship’s magazine. Records show that the British had ordered the ships to proceed to a British port for inspections, but the Spanish, instead of complying, attempted an attack despite being outgunned. More than 250 people lost their lives that day, 51 crew members being rescued from the sea. The other ships in the flotilla were interned in Britain.

Odyssey Marine Exploration was tasked to find the Nuestra Senora de las Mercedes shipwreck. The company managed to locate the wreck in 2007 as part of what they called the Project Black Swan. Odyssey was at first unaware of the precise nature of the treasure and artifacts it had discovered, and only made the findings public later on. By 2012, 600,000 silver coins weighing more than 17 tons were carried to Spain, and a legal battle also ensued that had Odyssey pay $1 million to the Spanish despite historical records indicating that more than 72% of the coins transported and found on the Nuestra Senora de las Mercedes shipwreck came from Spanish merchants and not the Spanish Government.