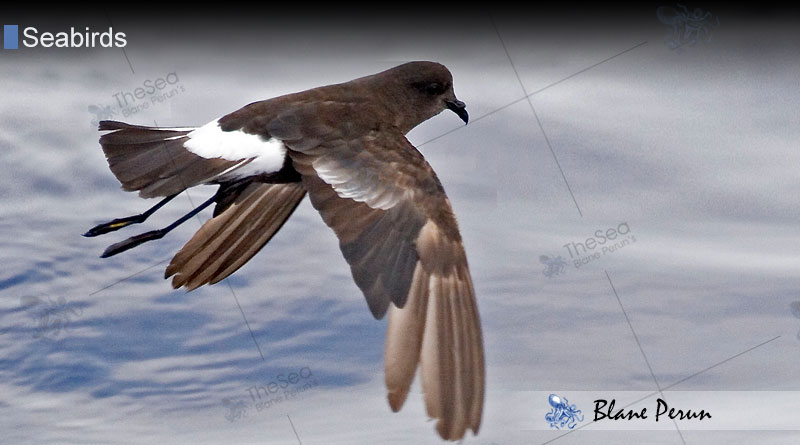 The storm petrel is known to be the smallest seabird in the world. With its body not exceeding 26 cm and weighing a few grams only, these tiny seabirds are incredibly hardy and they can be found in all oceans and in most seas on Earth.

Storm petrels are similar in size to sparrows and they are black and white in coloring as well, but without the long the forked tail that distinguishes sparrows. They can be categorized into two families: the Oceanitinae, characterized by long legs, short wings, long skulls and square-shaped tails, and the Hydrobatinae, which have shorter legs, longer wings and wedge-shaped tails. In terms of plumage coloring, the two families are quite similar: they are both dark, with Oceanitinae having more white in the rump area.

Storm petrels eat crustaceans, small fish and plankton. Some of them consume mollusks and droplets of oil, while others hunt for goose barnacle larvae. They can swim, but they prefer to just snatch food from above the surface of the water or to take short dives if the area is shallow enough. They are very often seen doing their characteristic “walk” on the surface, looking for food. They usually associate with other, larger seabirds, even mammals that make food easier for petrels to obtain. They are often seen around penguins, seals and other predators that push food to the surface of the water, allowing petrels to snatch nutrients more easily.

These tiny birds form large colonies on islands. They usually return to their nests at night in order to avoid predators, gulls and skuas, during the day, spending most of the day hunting for food over the sea. The only exception from this behavior are the petrels that nest on the Galapagos Islands – they spend the day around their nests and go hunting during the night. These tiny birds are monogamous and they mate for life. The pair usually has one single egg in one mating season, and the male and the female take turns sitting on it. Hatching takes place after 40-50 days, with the young being brooded for only about a week longer. After this period, the young is left alone in the nest while the parents go hunting during the day. It is fed through regurgitation during the night. Fledging usually takes place when the young is 50-70 days old.

Some of the sub-species migrate, covering longer or shorter distances after their breeding season is over, while others are thought to remain in the same nesting area all their lives. Storm petrels may be tiny, but they are long-lived birds – many of them live till the age of 30.

Even though storm petrels are quite widespread, their lifestyle makes them very difficult for scientists to study, so, when it comes to the smallest seabird in the world, there is certainly a lot to find out.