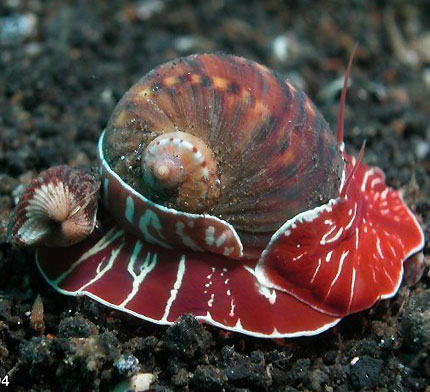 Snails are a group of mollusks that belong to the class Gastropoda. While there are many types of gastropods that live in other types of habitats such as land or fresh water, there are many that inhabit the marine environment.

While there are also marine gastropods without shells, they are often referred to as sea slugs, nudibranchs or sea hares. Sea snails are gastropods with shells. Because there are entire clades dominated by marine gastropods, or some clades have both marine and terrestrial species, it is difficult to describe general physical appearance, habitat, feeding and reproductive habits. However, there are some main traits that can be described.

These marine gastropods all have shells, and they are typically spirally coiled. There are other forms of shells such as conical, while in the case of some species belonging to the family Juliidae, the shell has transformed itself into two hinged plates which look more like a bivalve’s shell than a snail’s. The shells of sea snails vary in both shape and size, and they may range from less than a millimeter to 91 centimeters, as in the case of the largest sea snail – Syrinx aruanus – that also weights 18 kg.
Because of the strong and durable structure of most shells, sea snail records are very well represented. In terms of anatomy, these animals are diverse, as most marine species use gills to breathe, with some intertidal species having lungs, while some false limpets being air-breathing.

While most terrestrial types of gastropods are herbivores, marine species have varied feeding habits. A common characteristic shared with their terrestrial counterparts is that they have a radula, which is a bony structure with many rows of tiny teeth, used to scrape food off rocks or other surfaces.

Most marine species may consume vegetal matter, while there are a great deal of species that are carnivore. There are species of marine gastropods that feed on corals, the species of a particular snail family use their radula to drill small holes into other shelled organism such as clams or crustaceans.

In terms of reproduction, marine snail habits are as diverse as the species. Most of them are hermaphrodite, meaning they have organs for both sexes but are unable to self reproduce, while others may have individuals of separate sexes. Some species of sea snails can start out as a male for example, and then turn to a female.