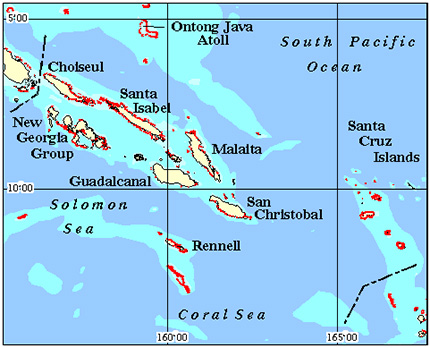 The Solomon Islands are the northern group of a huge arc of islands delimiting the northeast boundary of the Coral Sea. The archipelago, oriented southeast to northwest, stretches about 1700km between Bougainville in the east of Papua New Guinea and the northern-most islands (The Banks Group) of Vanuatu. The six main islands are: Choiseul; Santa Isabel; New Georgia; Guadalcanal; Malaita; and Makira. They are arranged roughly in a double chain with the two ‘strands’ enclosing a relatively sheltered sea area comprising New Georgia Sound (‘The Slot’ of World War II), between Choiseul, Santa Isabel and New Georgia, and Indispensable Strait between Malaita and Guadalcanal (Fig 1).

The land area of 28,370km² makes the Solomon Islands the third largest island nation in the South Pacific, after Papua New Guinea, and New Zealand. The 200 mile EEZ encloses 1.34 million km², twice that of neighbouring Vanuatu, slightly larger than Fiji, and a little smaller than the areas of Cook Islands, New Caledonia and the Northern Marianas Islands. The total area of internal waters within the 12-mile zone is 0.3 million km², where most of the coral reefs occur. The archipelago was formed about 25 million years ago by tectonic plate movement, earthquakes, and by considerable submergence and emergence (Maragos 1998). Thus fossil corals are found high on the slopes of Mount Austin behind Honiara. There are about 1000 islands (comprising small islands, atolls and islets) which are mostly raised volcanic islands with the reefs predominantly fringing on the steep slopes (Maragos 1998). The six largest islands, rise steeply from the sea and each has a central mountain spine with peaks up to 2450m. Large coastal plains only occur on Guadalcanal, particularly in the northeast. Solomon Islands is within the ‘Pacific Ring of Fire’ belt and still has active and dormant volcanoes. The two active volcanoes are the Kavachi submarine volcano south of Vangunu in eastern New Georgia, and the Tinakula volcano far to the east in the Santa Cruz Group. Dormant volcanoes, that still emit fumes, are Savo Island between Florida Islands and Guadalcanal, and in western New Georgia, Simbo volcano on Nusa Simbo Island and Paraso volcano on Vella Lavella.

The two main climate systems affecting the Solomon Islands are the southeasterly trade winds (Ara) that blow from May through to October and the northwesterly monsoon winds (Koburu) that blow from December until March. Fine, sunny, relatively calm weather normally occurs during the months of April and November. Air temperatures in the Solomon Islands do not vary considerably; mean daily temperature throughout the year averages 28°C ± 2°C, with minima to 23°C in the early morning of the Ara season. Daily maxima are normally 30°C. Rainfall ranges between 3-5 metres per year. There is generally more precipitation during the wet Koburu season than during the relatively dry Ara season.

Sea surface temperatures in the Solomons are consistently in the high 20s with a small annual variation. At Honiara, at 9.5°S and about mid-latitude for the archipelago, the mean monthly sea surface temperatures measured over 65 months from July 1994 until November 1999, ranged from 27.4 to 30.1°C. The average of the 65 monthly means was 29.08°C. Minimum and maximum daily temperatures within this period were 26.5 and 31.6°C. The coolest temperatures commonly occur between August and October and the highest temperatures between January and March. Sometimes the mean monthly sea temperature is above 29.5°C for 4 or 5 consecutive months (data from Solomon Islands Meteorological Service).

Tides in the Solomon Island are diurnal i.e. it takes almost 24 hours for the tide to rise and fall. The spring range is about 1.4m and the neap range about 0.45m. The tidal curve is asymmetric; the tide falls much faster than it rises (Womersley and Bailey 1969, Fig. 129). In the latter half of the year, the low tide tends to occur at about midday. But from about October, the time of low water shifts so that in the other half of the year the time of low tide moves to about midnight (Morton and Challis 1969; Womersley and Bailey 1969).