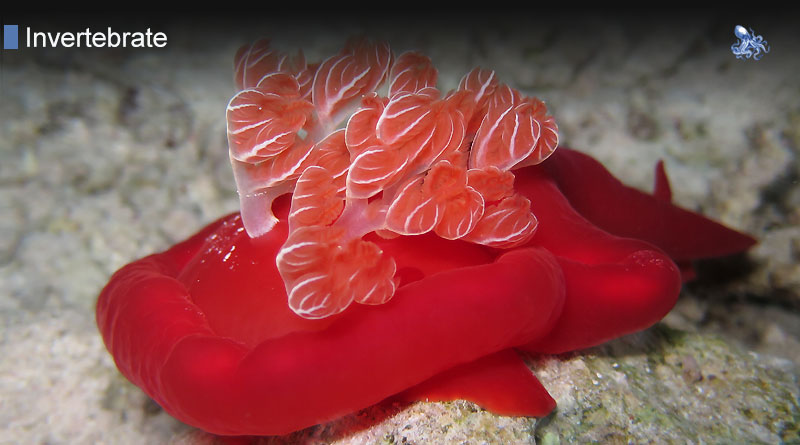 The Spanish dancer is a large species of nudibranch, a sea slug of a spectacular, bright red color. It is a species of dorid nudibranch, which means that it uses gills for breathing. Widespread across the Indo-Pacific, from the Red Sea to Australia and from Hawaii to Africa, these beautiful creatures prefer waters up to 50 meters deep, especially coral reef areas where there are many sponges and crevices to hide in.

This bright-colored nudibranch is large, usually growing to around 60 cm, but 90 cm long individuals are not rare either. These creatures don’t have any shell they could use as shelter, but they don’t need any hiding – their bright red color tells predators that the nudibranch is dangerous, guaranteeing the animal safety from any external attacks. The body is flat, soft and of an orange-red color with whitish dots. The dorsal part accommodates six transparent, leaf-like gills and a pair of tentacles that can be retracted. Spanish dancers advance on the sea bed with a crawling movement with the sides of the body curled inwards. When it gets startled or senses any kind of danger, the edges are straightened and the animal starts swimming by contracting its body, undulating and twisting its mantle, looking like a dancer wearing a large and ruffled red flamenco dress, doing her spectacular dance – hence the animal’s name.

This nudibranch species is nocturnal, spending the day hiding in crevices and coming out to feed only at night. The Spanish dancer feeds mainly on sponges and various toxic jellyfish the toxins of which the dancer assimilates and uses for defense. The animals eats with the help of the radula, a file-like tongue, serrated to make it easier to break up food particles.

Like all nudibranch species, Spanish dancers are also hermaphrodites, each individual having male and female reproductive organs. The slug lays a ribbon of eggs that is just as spectacular as the animal itself – the large ribbon is of a bright red color and it is wrapped gently around a rock. The eggs are in plain sight of predators, but they are usually left alone by other marine species because they contain high concentration of toxins that can be lethal for other animals. Given the toxic composition, the eggs of the Spanish dancer don’t need protection from the parents.