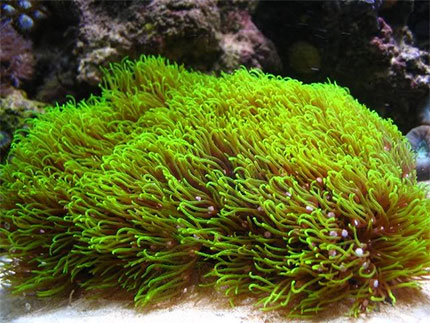 The Star polyps are members of the family Clavulariidae and can be found in many regions of the Indo-Pacific. They are usually white or brown with a white dot in the center of each polyps, although some more rare Star polyps are green. They grow rapidly and are a favorite amongst hobbyists because of their easy care and peaceful dominance. They are often referred to as Starburst, Eight Tentacle, Mat or Daisy polypss.

The Star polyps have distinctive eight-leaved tentacles on each polyps. They are colonial animals with several individual polypss attached to a piece of live rock. Star polyps have long been confused with Xenia, to which it superficially resembles. Their stems are usually quite short (less than 12mm). The base is a fused, encrusting mass which is rather rubber-like in quality and usually purple in color.

The most common method of star polyps reproduction in the marine aquarium is accomplished by division. This occurs as the basal mass increases in size and develops new polypss. They also reproduce with sperm and eggs being shed into the open ocean and found in colonies in far away locations, but this star polyps method of reproduction seems to be uncommon in a tank environment.

All star polyps thrive in medium to strong water flow and are very peaceful. This means that they should not be placed next to more aggressive corals that may harm them. Star polyps require a medium to high light level for continued health, along with the addition of iodine and other trace elements to the water.

Star Polyps contain a symbiotic algae, zooxanthellae, hosted within their bodies to provide for the majority of their nutritional requirements through photosynthesis. They also benefit from weekly feedings of micro plankton or foods specifically designed for filter feeding invertebrates.

The star polyps are highly resistant to disease but do occasionally suffer predation from certain snails and nudibranchs such as Pleuroleura. Star polyps will not tolerate deteriorating water conditions, overfeeding or overstocking of fish. It is essential that they do not become encumbered by nuisance algae or by decorative algae. Occasionally, polypss refuse to appear from the basal structure that has been dormant for some months. Usually they can fully recover if proper tank conditions are achieved.