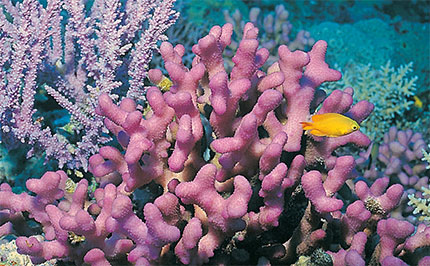 Stylophora coral has rounded branches with blunt ends that differentiate it from other closely related small stony polyp corals. The coral is usually a beautiful pink color, but can also appear in red, green and brown as well. The stalks of the coral with bulbous ends make it an extremely interesting coral to add to saltwater marine aquariums.

Stylophora is considered a moderately difficult coral to maintain in an aquarium setting and should only be incorporated into an already established, mature reef setting. To maintain its bright colors, the coral requires a strong lighting source, preferably provided by metal halides, but may also do well with intense power compact or T-5 fluorescent lighting as well. For continued good health, it will require the addition of calcium, strontium, and other trace elements to the water. Stylophora also needs strong water flow.

Stylophora relies heavily on the products of its zooxanthellae, but it may benefit from the addition of phytoplankton as a food source. While the coral itself may consume some phytoplankton, the real benefit of this feeding method is the increased population of rotifers that feed on the phytoplankton. The coral can also benefit from finely ground meaty foods in the consistency of paste.

As with many small stony polyp corals, Stylophora has sweeper tentacles that reach out at night for feeding and may damage other corals in the marine environment. The colony needs several inches of space between it and its neighboring coral in a tank. It is still considered a peaceful type of coral, but they are considered semi-aggressive as well due to those sweeper tentacles.