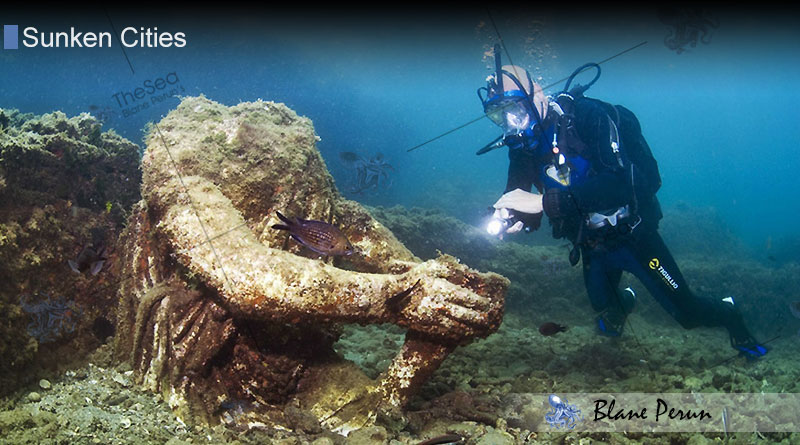 Baia – or Baiae, as it was known during the time of the Romans – is one of the most interesting submerged Roman cities divers can explore. Situated in the Gulf of Naples and discovered rather recently, in 1959, it used to be a flourishing Roman coastal resort, frequented by well-known statesmen and members of the military, such as Gaius Marius and Lucius Lucullus. Even Julius Caesar owned a villa in Baia, and large part of the town became imperial Roman property later on, under Augustus. The most volatile aspect of the town, however, was its placement in a volcanic region known for its frequent volcanic activity. Although the city was not destroyed as a result of this, it did end up being submerged under the sea.

The city of Baia can be found in the northwestern area of the Gulf of Naples in modern day Italy, being quite well-preserved and known for its well-designed villas and terraces meant for wealthier members of Roman society. Although the thermal establishments, gardens and promenades have not been preserved, due to exposure to the unforgiving sea currents across the past few

hundred years or so, this remarkable underwater site, made available to the public through the Archeological Park of Baia, is an ideal location for divers to explore the beauty and intricacy of the submerged city.

The isolated location of the city, as well as its famed bathhouses filled with warm mineral water channeled to the surface from underground sulfur springs, made it an ideal spot for Rome’s finest society to establish as a resort. While the mild volcanic activity did not affect the city to a great extent, it did play a major role in its ultimate downfall. As time passed, the city was gradually abandoned by the 1500s, due to recurrent malaria, and was ultimately submerged, along with part of the coastline, due to an increase in volcanic activity.

What really made Baia popular was the hedonistic lifestyle it was associated with during its prime time, as one of the most well-known Roman resorts during the first century. The blending of Baia’s natural beauty and impressive, luxury architecture can still be seen by divers who venture under the surface of the Gulf of Naples today, seeking to explore the ruins of the ancient city. Known as “the home of vice” but also hailed by many as one of the most luxurious and beautiful places of the era, Baiae is still considered as a ravishing destination by most tourists today.