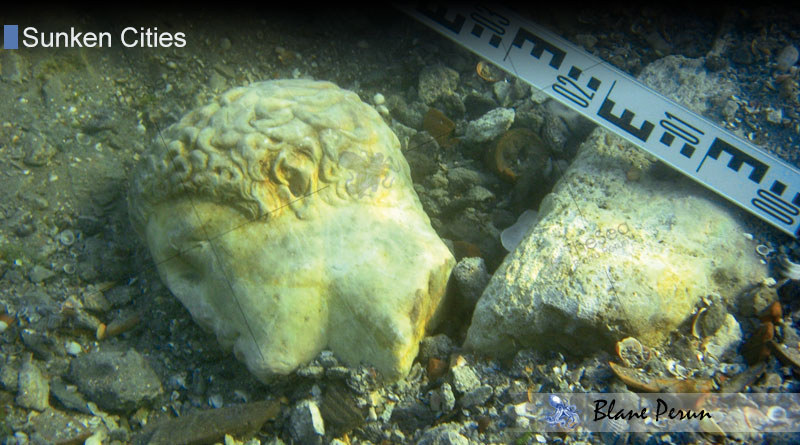 Founded in 543 BC on the Taman Peninsula in Greece, Phanagoria is the ancient capital of the Bosporan Kingdom and used to be an important center of trade placed between the southern Caucasus and the Maeotian Marshes. The city’s placement near the fascinating hills, ravines, small volcanoes and crevices of the Taman peninsula, as well as its central importance as an ancient metropolis, made it one of the most well-known and well-documented partly submerged ancient cities ever discovered.

The city of Phanagoreia – as it was known to the Ancient Greek – must definitely have been a sight to behold more than 2,000 years ago, when it slowly grew as the most important area of the Bosporian Kingdom. A large area of it remains underwater, as archeologists continue to probe and investigate the depths of the sea, in search of more clues. The city is situated between the Sea of Azov and the Black Sea, on Russian soil; it was found in the 18h century, when archeologists discovered statue bases featuring dedications to Aphrodite at the site.

Part of numerous intrigues and known to have risen at the expense of Panticapaeum’s decline (the previous capital city), it remained a thriving and expansive area for more than 1,500 years, up until the 10th century AD, when it is believed that an invasion by The Rus led to the city’s downfall. Part of the city (about 1/3 of the roughly 190 acres that encompasses it) became submerged over time, while the town of Matrega was built on the surface ruins. Now property of Russia, the submerged city is said to contain the oldest known acropolis discovered in modern day Russia, while most evidence cannot confirm the claim of the city being destroyed by an invasion. The true cause of Phanagoria’s downfall is, as of yet, still unknown.

The underwater city was nicknamed the “Russian Atlantis” due to its massive port structures, statues and necropolis being completely submerged. Divers can explore here large marble plinths, representing the bases of huge statues and structures, as well as numerous smaller relics that paint a vivid picture of the city’s history, preserved by gentle sea currents. Unlike in the case of many other underwater cities, uncovering the secrets of Phanagoria through excavations is an extremely slow and tedious process, not only because of the fact that the city is underwater, but mainly since it’s buried under a thick layer of sand and over 7 meters of dirt.