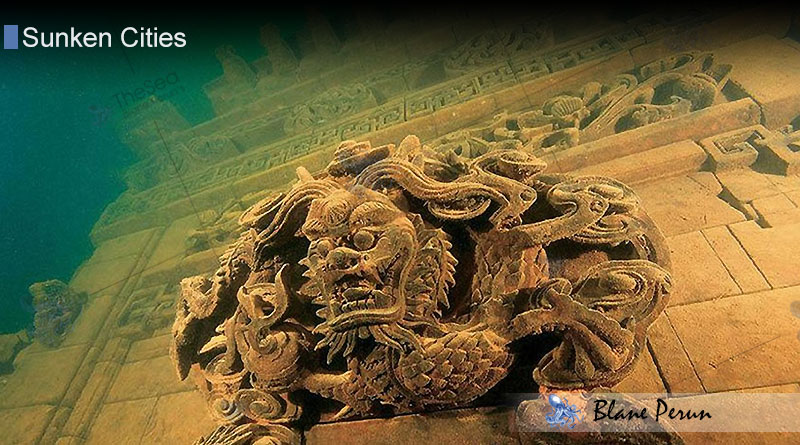 Shicheng is an important ancient city in China that was all but forgotten after the Chinese Government decided to build a hydro-electric power station, and proceeded to create a man-made lake that completely submerged the city underwater. The city was one of the most important cultural, political and economic centers of Ancient China, and was founded more than 1,300 years ago. The city was discovered in 2001 and has recently been put back on the map as a tourist attraction, remaining submerged dozens of meters underwater for diving enthusiasts to enjoy.

The city of Shi Cheng was built close to the Five Lion Mountain, which can be seen looming proudly behind it – this is the city was named Lion City. While the valley it was built in is now a beautiful lake known as the Thousand Island Lake (Qiandao Lake), the historical and cultural heritage of the intricate buildings standing tall below the lake remains priceless. The city used to be an important economic and political center associated with the eastern province of Zhejiang. Also a busy and thriving trade center, the city’s streets used to be filled with travelers and merchants, and its beautiful handmade statues, carvings and structures continue to hold many of the secrets of China’s ancient heritage.

The late 1950s were a time of progress and expansion in China, and in 1959, the government decided to build a hydro-electric plant. The dam they’ve built, however, redirected much of the water used for the plant into a man-made lake – Qiandao – which replaced the glorious site of the forgotten ancient city of Shi Cheng. Forgotten for more than 53 years, the city was rediscovered once more in the 2000s and became somewhat of a time capsule, sheltered by the elements above, retaining its beauty and intricacy in the still waters of the lake.

The wooden and stone structures within the underwater city remain remarkably well-preserved, despite the fact that Shi Cheng is more than 40 meters under the surface of Lake Qiandao. Divers here can explore houses made out of brick and wood that can be found in perfect condition, as the still, cool waters of the lake are able to preserve them in a much more efficient fashion than they would have been kept, if the city remained as it was. Considering this is a lake dive, it is important for tourists to keep in mind that visibility can easily and suddenly deteriorate, thus extra care must be taken when moving under the water.

Shicheng is now one of the most beautiful destinations for diving enthusiasts in China, becoming somewhat of a wonder of the underwater world.