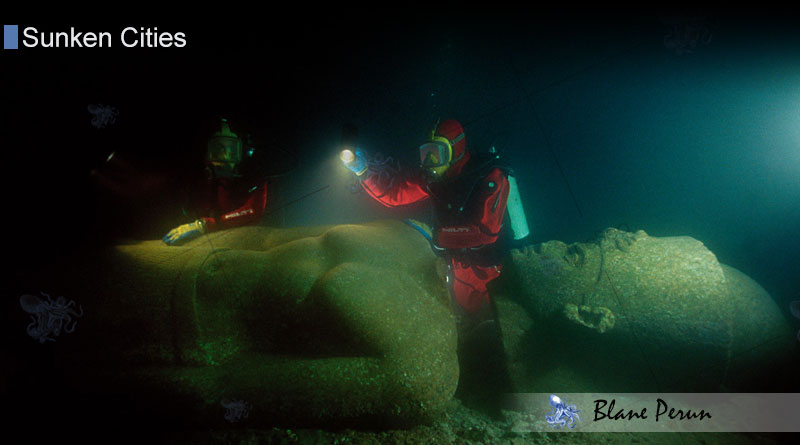 Up until the beginning of the past decade, Thonis-Heracleion was seen by many archeologists as a myth or legend – the story of a city of outstanding wealth and cultural diversity, set at the crossroad of Greek and Egyptian trade routes. Visited by Helen of Troy and mentioned by Herodotus, the city was described as a place of unfathomable wealth and glory. Believed to have been founded around 1,200 BC, the city of Heracleion was a thriving center of commerce during ancient times, facilitated by its

original placement on adjourning islands on the Nile Delta. Its network of canals made it possible for ships to easily travel to and from its numerous ports and harbors, leading the city to flourish most especially between the 6th and 4th centuries. French archeologist Franck Goddio reintroduced the legendary city to the world in 2000, after an Egyptian underwater survey discovered the first glimpses of this remarkable world lost in the depths of the Mediterranean more than 1,700 years ago.

The city of Heracleion is considered to be one of the wealthiest and most fascinating wonders of the ancient world, its discovery revealing hundreds of shipwrecks that divers can explore – including 60 that date back to the 2nd century BC, more than 700 anchors, many colossal statues, as well as jewelry and coins that have vast historical value and significance. The city was also famous for its Temple of Khonshu – known by the Greeks as Heracles – and for its sanctuaries to the Egyptian gods (particularly Osiris). Thonis-Heracleion sank some time during the 2nd or 3rd century AD, as a result of the liquefaction of the stilts it was built on, leaving numerous statues, relics, buildings and important symbols of Egyptian culture to be submerged and preserved by the deep ocean for centuries, until their discovery.

The city was discovered in 2000, then gradual progress was made uncovering its secrets and its underwater treasures. While excavations and discoveries have uncovered many important archeological finds, only a small percentage of the entire city was thoroughly investigated. The large area to be uncovered stretches out across a region of more than 40 square miles, and it is estimated that even more secrets are to be unearthed as time goes by. From its numerous shipwrecks and small relics, to 16-foot statues and its impressive temple placed at the heart of Thonis-Heracleion, the city is considered today to be one of the most important underwater archeological discoveries of recent times, attracting divers interested in history and unique adventures.