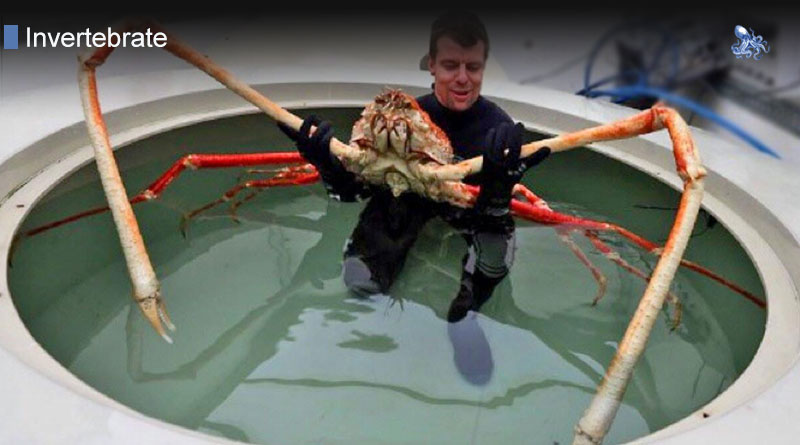 The Japanese spider crab is the largest crustacean on Earth. This means they have the biggest leg span of all arthropods known today and they are superior to any crab species in terms of weight as well, but these are only two features that make them extraordinary.

Japanese spider crabs can reach 3.8 meters in leg span, measured from the end of one of the crab’s large claws to the other. The carapace is also impressive, in many cases measuring 40 cm in width. Such a large animal cannot be lightweight and, indeed, the Japanese crab weighs a lot, too: the largest Japanese crabs can reach up to 20 kg.

Japanese crabs are different from other crab types not only in terms of body size. The swimming legs, called pleopods, are usually straight in the case of most crab species, but Japanese crabs have strangely twisted and bent legs in the front to enable them to climb on rocks. The hind legs are also longer and more bent then in the case of other crabs, giving the animals their characteristic, spider-like appearance. The limbs of the Japanese spider crab are not only long and thin, but also relatively weak and poorly joined to the rest of the animal’s body – most Japanese crabs examined were lacking at least one leg, usually one of the front limbs. Even though Japanese crabs seem to be feeble creatures, they are very resilient and adaptable, being able to regenerate lost limbs during successive moultings. Japanese crabs are orange-colored, featuring white spots on the legs, and they have tiny growths on the surface of their carapace.

These large crustaceans are mainly found in the waters around Japan, predominantly around the southern shores, between Kagoshima Prefecture and Tokyo Bay, but there are large populations around Taiwan as well. Adult crabs usually prefer the deeper waters (between 50-600 m depths), their favorite layer being around 300 m, where water temperature is constantly around 10 degrees C (50F).

Japanese spider crabs are not only resilient, but very long-lived as well, with average life spans between 50 and 100 years. Fertilization occurs internally, with the females carrying the unhatched eggs on their abdomen, in special appendages for a period of time determined by how favorable the conditions for hatching are. The eggs hatch to release planktonic larvae that do not resemble adult crabs at all – they are small, transparent and they don’t have any legs. Japanese spider crab larvae take up to 72 days to become fully developed adults and they undergo three different stages of development, each stage followed by moulting, before they become the large omnivorous crustaceans known as adult Japanese spider crabs, living in holes and coves on the sea bed. Until then, the tiny, round-bodied larvae drift on the surface of the sea.

In late 2004, November I think I traveled to the Bahamas and this was the very first time I had

August 3, 2021 Comments Off on Oranjestad Aruba