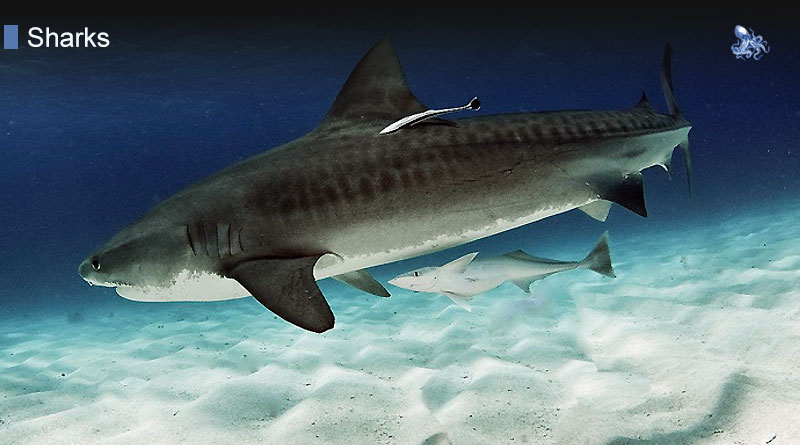 The tiger shark is a unique species of shark considered to be quite a fierce and dangerous predator that roams most tropical waters. As most species of shark, this member of the Galeocerdo genus is a carnivore, and is noted for having one of the most diverse feeding habits among all sharks. Some researchers have even nicknamed them “garbage eaters” since they have been known to consume a significant quantity of man-made objects and materials that have found their way to the bottom of the sea. Despite being estimated to live up to 50 years and being an apex predator – with only killer whales occasionally preying on them – tiger sharks are currently labeled as an endangered species.

One of the most interesting traits of the tiger shark has to do with their skin which is typically either blue or light green, featuring a white underbelly and distinctive dark stripes found especially on younger members of the species. The lines fade in time, as the shark grows, however, they never fully disappear, which has led to the well-known nickname of “sea tiger.” Also like tigers, tiger sharks are normally only found in tropical and temperate regions, where the water is much warmer and the sharks are able to find prey more easily.

These types of sharks are a species of requiem shark that features a large body, blunt nose and sharp serrated teeth. They are powerful predators that have also been known to attack humans on occasion, and unlike great whites, they don’t lose interest after the first bite. Generally, they are solitary hunters preying on fish, squids, sea snakes, but also on marine mammals such as dolphins, and even various sea birds. They are also known to swallow practically anything they find, their sharp teeth and powerful jaws even being able to crack the shells of crustaceans, clams and sea turtles.

Members of this species are commonly found along the coastline, much closer to the coast itself than most sharks or other large fish. They can usually be seen in the Gulf of Mexico, the Caribbean and most areas of the West Pacific, as far north as Japan, or in the far south, along the coast of New Zealand. Tiger sharks can easily adapt to their conditions, most being found in waters 900 meters deep, as well as in shallow waters such as those along the coast of Hawaii, where they swam through areas where the seabed was only 3-4 meters deep.

Tiger sharks are the only species in its family that actually reproduces by having its eggs hatch internally. Their young can actually remain for up to 16 months inside the mother’s body after they hatch, then they continue their development in the ocean. Female tiger sharks can have between 10 and 80 litters on average, and the newborns can be about 50-60 cm in length by the time they are developed enough to leave their mothers and fend for themselves. The tiger shark is quite a unique species that researchers still have not been able to gather enough information about; while it is established that young tiger sharks reach maturity by the time they are 2-3 years old, even the overall lifespan of these fish is still unknown.