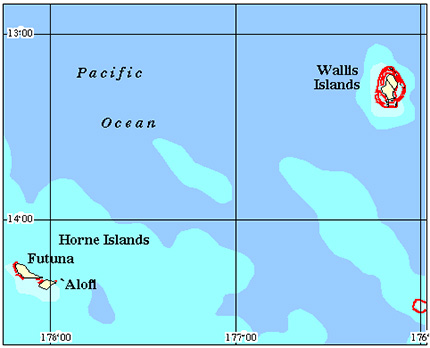 Wallis and Futuna is a French collective of islands that are located in the South Pacific. They are part of France’s territories, alongside the islands of Alofi. All of these islands are of volcanic origins. Corals are quite abundant in the region. Locals take so much pride in these coral populations that they even feature them on the stamps.

Wallis features fringing coral reefs around the majority of its coastlines. A fringing reef is part of the three main reef types, alongside barrier reefs and atolls. They are distinguished from the other two by the fact that they are found mostly in shallow waters. Fringing reefs grow directly from the shorelines. They can also grow hundreds of yards from the shore and feature extensive backreef areas. Wallis is also encircled by a barrier reef, which is broken by passes, giving boats access to the mainland. The area between the island and the reef is a sheltered fishing ground. On the reef’s edge, a number of sand cays can be spotted.

Futuna features narrow fringing reefs on virtually all of its coasts. What little research has been conducted on these reefs here shows a level of diversity that is modest compared to other regions. There are only about 30 coral genera and around 330 species of benthic fish.

Divers wanting to explore the reefs of Wallis and Futuna will get the chance to see butterfly fish, groupers, parrotfish , stingrays and a diversity of other marine creatures.