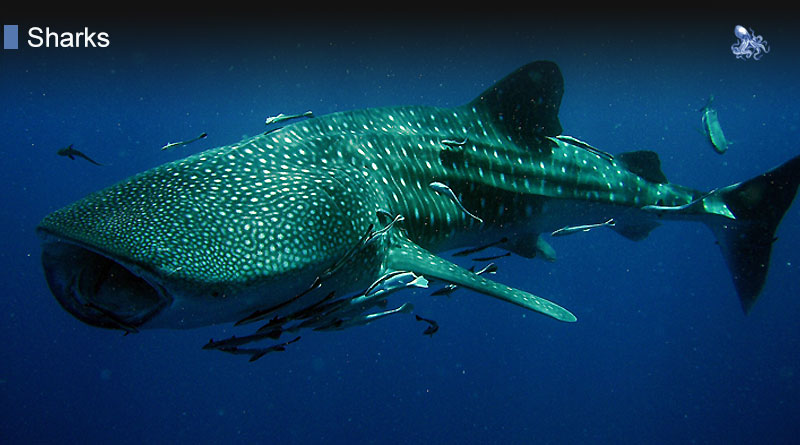 Reaching the size of 12 meters in length and weighing more than 21 tons, the whale shark (Rhincodon typus)​ is the largest fish in the world’s seas and oceans and the largest non-mammal vertebrate on Earth.

Whale sharks are widespread in tropical and temperate waters the world over. They are pelagic animals, spending most of their life in the open sea, but they don’t like areas where the water is too deep. They are frequently spotted in shallow coastal areas as well, even in lagoons and estuaries. Whale sharks migrate over large distances and not only horizontally, but vertically as well, spending much of their time at depth of around 1,300 meters, but also taking frequent trips to the surface. They sometimes form large groups – in 2011, a group of more than 400 individuals was seen at the Yucatan Coast.

These enormous creatures are filter feeders, therefore their wide mouths are lined with very small teeth arranged in 300-350 rows. The mouth can reach 1.5 m in width. Whale sharks have five gill pairs on their wide, flat heads and small eyes. Their skin is very thick, in some places 10 cm in thickness, dark-colored, with whitish spots and stripes on the back and their belly is white.

Whale sharks are active filter feeders, which means that they are able to feed even when in a stationary position (unlike many other shark species that need to be in continuous movement to be able to feed). They thrive on planktons, fish eggs, larvae and other microscopic or very small life forms. Their teeth are so reduced in size because they play no role in feeding – whale sharks eat by swimming forward with their mouths open, pumping the water they move through their gills and extracting the nutrients during the process with the help of their special and unique filter pads.

There is still a lot to learn about the life of whale sharks. Very little is known about their reproductive behavior and the little information held by researchers is based mostly on presumptions. In 1996 a pregnant female individual was captured – she had 300 pups inside her body, which indicates that whale sharks are probably ovoviviparous, which means that the females nurture the fertilized eggs and the embryos inside their body until the juveniles are sufficiently developed to survive outside the mother’s body. The young are only about 40-60 cm when they are born and they are probably not born in one go, females producing a relatively steady stream of juveniles for a long period of time.
Whale sharks are long-lived animals, reaching sexual maturity at around the age of 30 and living for around a century, perhaps even more.
Despite their astonishing size, whale sharks are very docile creatures, often swimming together with humans. There are many reports by divers who say that the whale shark individuals they met allowed them to grab their fins and dragged the divers through the water without harming them.