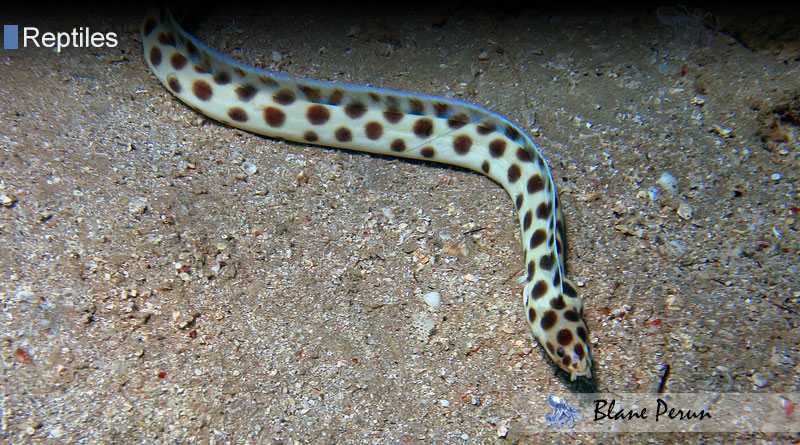 Also known as “coral reef snakes,” sea snakes are venomous marine snakes that are divided into more than 60 different species. Having evolved from snakes living on the land, they gradually reached a point where they began spending most of their time in the water, often being found in coral reef habitats and other areas closer to the shore. Most of these snakes can grow to sizes of about 1.2-1.4 meters, however, some species, like Hydrophis cyanocinctus, can even reach up to 3 meters in length.

The sea snake’s diet primarily consists of fish and crustaceans, although they also prefer eels. Depending on the species, sea snakes can be somewhat diverse about their diet. Some prefer to eat only fish, while others add both fish and crustaceans to their diets. Other species specialize in capturing and eating mollusks and crustaceans, which also include prawns. There are even species that feed solely on fish eggs.

Sea snakes don’t shy away from attacking larger fish, and despite their small mouths, they are able to catch and eat their prey quite successfully. Sea snakes found in coastal areas are extremely poisonous, and their venom can quickly paralyze and kill almost any small animal, despite the fact that only a small amount of venom is actually transferred to the victim. They are usually found trying to locate food in small holes and crevices, as well as under rocks, and they can also swim after their prey without much difficulty to catch it. Sea snakes have flattened tails that make them extremely fast and able to change direction in a split second. They are primarily confined to the tropical waters of the Atlantic and Indian Ocean, and they can often be seen swimming and searching for food in larger groups.

Sea snakes don’t usually prey on animals much larger than them, and they prefer feeding on marine life. However, their venom can be quite potent, which is why a few human deaths from sea snake bites were reported over the years. Fatalities are simply rare because sea snakes rarely attack humans, however, their venom is considered stronger than that of any terrestrial snake residing in Costa Rica, where the greatest populations of sea snakes can usually be found. Under normal circumstances, sea snakes would never bite humans, even in the case of scuba divers who may intrude on their natural feeding grounds. However, they are able to bite in self-defense.