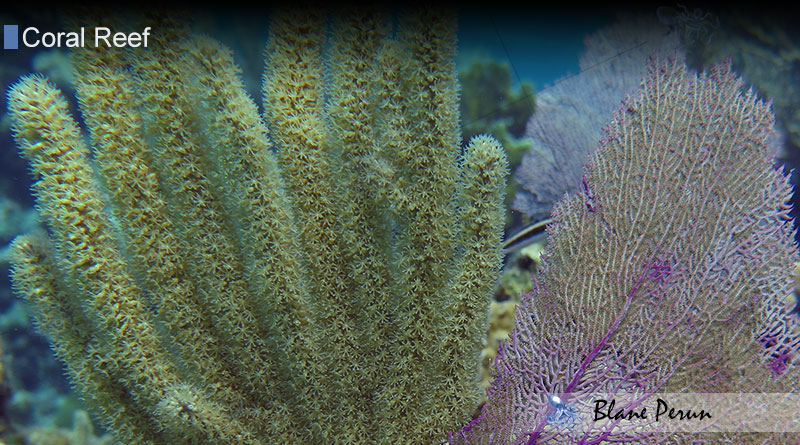 If we want to find out exactly what forms the structure called a coral reef, we have to delve into chemistry and biology, while also taking a look at the formation of the main types of coral reef structures found in nature: atolls, fringing reefs and barrier reefs. While the chemical process required for the formation of the calcium carbonate structures that make up these reefs is not too complicated, it also requires a delicate balance when it comes to vital conditions such as water temperature, salinity, acidity and the presence of two specific chemicals.

So, what forms the structure called a coral reef? While the detailed answer would describe the involvement of a few other organisms, the main role is played by hard (“stony”) corals and coralline red algae. Because most shallow waters are rich in bicarbonate and calcium ions, the organisms use these as their main building blocks. They extract the compounds from the water to form a hard substance known as calcium carbonate (CaCO3), and also called limestone. This substance has been found to form the large structures built over time by colonies of coral polyps, as well as the hardened skeletons that protect individual stony coral polyps and parts of the protective areas of the coralline algae. Each coral colony adds a layer to the reef structure, and over centuries and millennia, they are able to form large, solid reef formations like the ones we can observe today.

Now the question is, what forms the structure called a coral reef and how does the process occur from start to finish? The beginning stage is when free-swimming coral larvae attach themselves to readily available reef structures, stones or other hard surfaces along the coastline of islands and continents. As they mature, the larvae form a symbiotic relationship with zooxanthellae that helps them grow, then they begin secreting calcium carbonate deposits, which harden, and form or add to the reef structure. Over time, the polyps die, only to be replaced by new polyps, which then restart the cycle.

There are many different types of coral reefs, but the most important ones are barrier, atoll and fringing reefs. Fringing reefs form by extending themselves directly from the shore, so that there are no bodies of water between the reef and the coast. Barrier reefs often form extensive reef structures shaped like a large wall, that are separated from the coastline by a lagoon, and act to offer protection to the shoreline of continents. Atolls are circular reef formations surrounding a central lagoon and possibly a small cay or an island. Considering what forms the structure called a coral reef, these types of reefs can differ greatly in their formation processes.

What Is A Coral Reef

While many used to believe the majestic underwater structures known as coral reefs were some form of undersea flora, corals

What Happens When Coral Reefs Die

December 7, 2017 Comments Off on What Happens When Coral Reefs Die

What Forms The Structures Called A Coral Reef

December 7, 2017 Comments Off on What Forms The Structures Called A Coral Reef

What Animals Live In The Coral Reef

December 7, 2017 Comments Off on What Animals Live In The Coral Reef