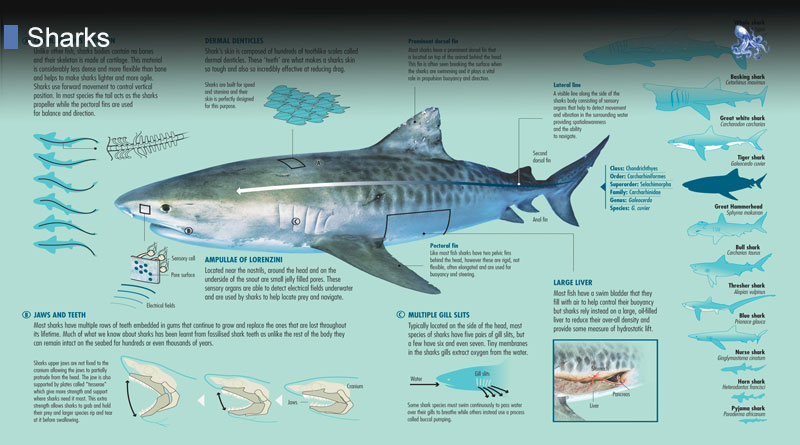 Sharks are certainly among the most diverse and most populous groups of aquatic creatures. They are varied in terms of size, diet, temperament, growth rate, even in terms of habitat choice, so it is probably easier to list features that are specific for each shark species than to find common traits, but there are some traits that all of them share.

Sharks are so called apex predators – top predators at the top of the aquatic food chain, with an important role in regulating the populations of the species that are below them – that inhabit all the seas and oceans of the world and live in some of the world’s rivers and estuaries, too.

All sharks share a number of physical features:
All sharks have skeletons made of cartilage, a tissue that is not as rigid and heavy as bones and allows sharks to move more freely and be more resilient;
All sharks breathe through gills;
They all use a process called osmoregulation to keep the amount of salt in their body at certain levels and to prevent the fluids in their body from becoming too diluted or too dense. They use their gills to achieve this balance.
They all have multiple rows of teeth – teeth that they lose and re-grow regularly;
All sharks have very good eyesight and their sense of smell is also excellent;
These features are more related to anatomy and not so much to size, shape, habitat or behavior – the 500 different shark species known today vary so largely in terms of physical appearance and habits that they need a more complex classification system.

There are numerous features that make sharks truly special and peculiar – here are just a few:
A shark’s denticles – which are tooth-shaped scales – make it possible for it to swim fast through the water without collecting algae deposits and barnacles, making them almost completely free of parasites;
Sharks have their own built-in toothpaste – the exterior of sharks’ teeth is made of fluoride, a substance frequently used in toothpaste;
Sharks tan too – some hammerheads are known to swim near the surface of the water to get tanned because darker skin means better camouflage.

Sharks first evolved about 450 million years ago, but they kept developing for another 140 million years, until their body design became as we know it today. The oldest evidence about the existence of sharks dates back to before vertebrates developed and, according to paleontologists, the ancient shark looked very different from what sharks look like today: it was only about 1 meter long, it had inflexible, triangular fins, slim jaws and teeth that had pointed ends. There is evidence that sharks lived in freshwater initially – it was only about 220 million years ago that they took to the sea and conquered it. Modern sharks date back to only about 100 million years, the white shark being one of the oldest species living today.