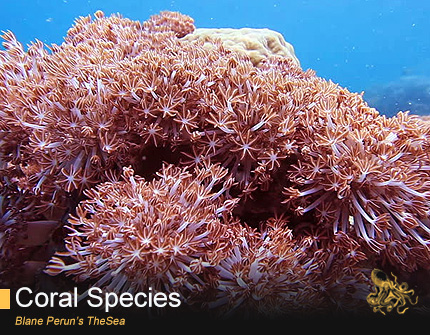 Xenia coral is well known for its relaxing effect on anyone who watches it. They are considered a soft coral, with sturdy stalks up to 3″ long, which are tan in color. As the water drifts past them, the polyps on the end of the stalks open and close in a pulsating or pumping motion. It offers a beautiful addition to any reef aquarium.

While some hobbyists cannot keep this type of coral alive, other hobbyists report that xenia are almost like a fast growing “weed”. Although there are guidelines that can be followed as to care in the home aquarium, no one seems to fully understand what will guarantee the success of xenia on the reef.

Xenia require an environment that includes moderate to strong lighting. Usually brighter is better for the coral living in a marine aquarium, although some success has been reported at lower light levels. The Xenia also require at least moderate water flow, as they are one of few corals that seem to do well right up against the strong output of a powerhead.

Xenia have sturdy stalks up to 3″ long, which are usually tan in color. The end of each stalk is covered with a crown of feather-like polyps, each carried on a 1″-2″ stem. Those polyps pulsate open and closed in a pumping motion. Groups of these stalks form colonies that can grow into large mats.

Xenia have an extremely low aggression level.They do not possess any apparent stinging capability, but tend to grow over and shadow other corals if allowed. When kept in the right conditions, they require frequent pruning to keep it from crowding out other colonies. Xenia is photosynthetic and does not accept any known foods if offered in the aquarium. It is believed that they can absorb some nutrients directly from the water, and may do better in tanks that are not frequently skimmed.

Xenia reproduce in the tank by attaching its stalk against adjacent surfaces and splitting into two colonies. With this phenomenon, xenia colonies tend to “walk” in the direction that the water movement bends their stalks. The coral can usually be coaxed to grow up the back glass of an aquarium.