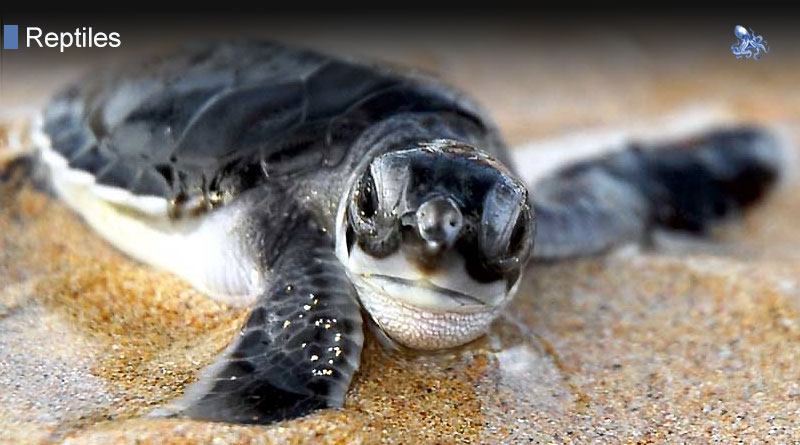 There are baby sea turtles found in all of the oceans of the world with the only exception being the Arctic ocean and any polar ocean waters. While they are found in all oceans, they are by far the most at risk of all of the sea turtles based on their size and lack of experience in the water with the predators that lurk nearby.

Baby sea turtles are the result of millions of years of mating and nesting rituals. When ready to lay eggs, the female will make her way to the beach where she was hatched and create a nes. She will use her hind flippers to dig a hole that is 40 to 50 centimeters deep, when the hole is to the female’s satisfaction, she will fill the nest with a clutch of eggs that will soon hatch.

A female will deposit 150 to 200 eggs, depending on the species of the female. The nest will then be refilled with the loose sand until it is not detectable by predators, and then the female makes her way back to the ocean.

Not all of the eggs of the baby sea turtles are fertilized, so some will hatch and some will not. The incubation takes about eight weeks, though it varies slightly from species to species as well as the temperature of the sand. If the eggs are nested in darker sand they will likely hatch sooner as the darker sands have higher temperatures.

When the baby sea turtles hatch, they tear out of their shells with their snout and then head towards the sea. Unfortunately, a very small percentage of the turtles will actually make it to the sea alive and those that do make it are still at great risk.

Only about .001% of the baby sea turtles that hatch will be successful in making it to the water alive as there are many predators that watch for the hatching. They are often hatching in large numbers, so the predators will literally stand around and wait as they emerge from the sand.

Baby sea turtles spend as long as the first five years of their life in beds of unattached seaweed, which gives them plenty of shelter as well as food. In fact, there are some species that spend most of their lives in these beds of seaweed that float in the middle of the ocean.

Baby sea turtles often feed on zooplankton and nekton before they begin to feed on sea grass. One thing that helps the turtles survive once they make their way out into the open waters is the hard shell and their instinctive ability to find beds of seaweed.