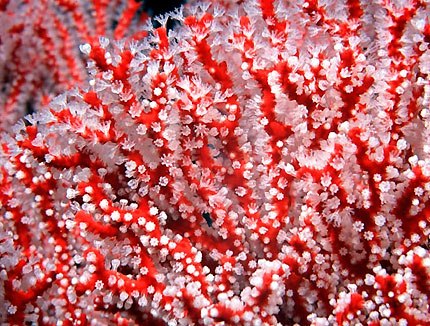 The tropics and subtropics of the Atlantic Ocean are home to almost 500 species of the Gorgonian Coral, a soft coral that is a member of the Anthozoa class. Although gorgonians can be found in sea waters all over the world, most originate near Florida, Bermuda and the West Indies, primarily in shallow water (some have been seen at extreme depths, such as several thousand feet, but this is not as common.)

The composition of gorgonians do vary from species to species, although all are stinging celled organisms with two body layers- an ectoderm and endoderm. Between these two layers is a layer of gel and canals, which help the small individual polyps to fuse together, in addition to allowing them to share food. The colonies are encased in a thick layer of outer skin, much like the rind of a lemon or orange, which covers this internal structure- a horny protein-filled material called gorgonin. All gorgonian corals have polyps with eight tentacles that branch off its base. While the gorgonian coral does not have any organs, the body of a gorgonian is segmented into eight chambers by membranes, surrounding the corals central gastro vascular cavity that allows it to consume large prey. This single opening is both an entrance and exit for food and waste.

Gorgonian coral form colonies through the intricate placement and fusion of their individual polyps, which can take up to 30 years to reach full size (10 feet across.) The ultimate shape of the colony can take many forms- erect, flat, branching, fan-like, bushy, encrusting and whip-like. There are also many types of colored gorgonians, always bright and vivid, including purple, red and yellow. Other fauna in the sea find the branches of gorgonian colonies an attractive place to dwell- such creatures include hydrozoa, bryozoa and brittle stars. Some creatures, such as the Pygmy seahorse, are well camouflaged within the Gorgonian Fragbranches of gorgonians, and therefore choose to settle there permanently.

The gorgonian uses a process called filter feeding to obtain nutrients essential for its growth and survival. Filter feeding is initiated when the fan portion of the gorgonian stretches across the ocean current at a right angle (instead of going with the ocean current) which allows for more water going through the coral and ultimately catching more of its food supply. The gorgonian polyp features eight tentacles which are responsible for trapping these organisms such as plankton.

Some gorgonian coral host photosynthetic algae called zooxanthellae- if a gorgonian has brownish polyps, it is usually a good indicator that the symbiotic algae are used for its nutrition. If a gorgonians polyps are bright and vivid in its coloring, the coral will make up for the loss in nutrition through increased filter feeding. Reproduction in gorgonian colonies is done both sexually and asexually, starting with polyps releasing eggs and sperm into the surrounding water. After fertilization, the cilia-covered larva swims off until it settles on the ocean floor, eventually attaching to a piece of rock or other hard substrate, where it will form a polyp and begin budding, the asexual reproduction process. Soon, a whole new gorgonian colony has begun.