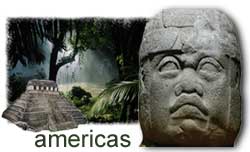 Coral reef ecosystems in the Tropical Americas are more numerous in the northern than southern Tropical Americas. Development is restricted on Pacific coasts by cold currents and upwellings off southern and central America, and on the Atlantic coast of South America by freshwater run-off of major rivers (Orinoco, Amazon). Reefs are best developed on Caribbean coasts. Coral reef ecosystems have been under increasing pressure from expanding human populations since the late 1900s. Under the jurisdiction of about 40 different countries the coastal resources provide important resources for millions of people. Degradation has outpaced comprehension of the problems and the ability to deal with them. The extent and accessibility of resources and human densities control the level of impacts. Generally, reefs on narrow offshore shelves suffer intense impact from terrestrial runoff and fishing. Where shelf and reef areas are large relative to the number of fishermen (Bahamas, Belize, Cayman), reef fish are larger and more abundant. 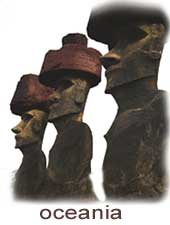 The Pacific region has an extremely diverse selection of mangroves, seagrasses, and coral reefs and is the largest region of coral reefs in the world’s oceans. There are extremes in the condition of coral reef ecosystems and in the extent of scientific information about them. In the Pacific Islands, there are about 146,000 ha of mangroves (about 0.7 percent of the world population), the largest areas occur in Solomon Islands, Fiji, and New Caledonia (Ellison, in press). Many mangroves have been lost to land clearing, agricultural development, and construction; and many suffer from pollutants such as oil spillage, contamination from heavy metals and hazardous wastes, and run-off (Scott, 1993). Seagrasses are usually found in water less than 10 m but can be found at depths of 50 m. Overall, the condition of coral reefs in the Pacific was rated to be about 70 percent excellent to good and about 30 percent fair to poor. Reefs removed from centers of human population i.e., most of the Australian Great Barrier Reef, atolls in Papua New Guinea, and the Caroline and Cook Islands are in the best shape (Ginsburg, 1994). 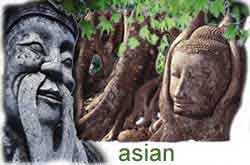 East Asia is unique in its abundance and variety of reefs and for the fact that it is at the center of coral reef ecosystem biodiversity. Mangrove is the dominant coastal community (at its diversity peak); it supports over 100 seabird species, and provides breeding and nursery areas for fish and shrimp. Over 30 percent of the world’s coral reefs are found in southeast Asia alone. Rapid economic and human population growth — over 440 million for peninsular and insular southeast Asia, with the population doubling in the next 25-35 years — and severe local coral reef ecosystem degradation also characterize the region. Coral reef ecosystems in more remote areas are probably in better condition. People extract about 60 percent of the regions’ animal protein from the sea. Major stresses include: organic and inorganic pollution, sedimentation, and overexploitation. For these reasons it is estimated that most of the reefs will be severely depleted within the next 40 years (Wilkinson et al., 1993).

Coral reefs ecosystems in the Seas of the Middle East (Map 2) are rich, visibly biodiverse and generally in good shape. Large cities and large coastal populations in bordering countries are rare, and human stress to reefs is comparatively low (Ginsburg, 1994). In the Red Sea, the world’s northern-most mangroves live along the southern Sinai coast. Seagrass beds are abundant in the region but their development is limited in areas with steep drop-offs and rocky terrain (ISPAN, 1992). The lack of rain and river input allows well-developed fringing reefs to thrive on both coasts of the Red Sea (less in the southern portion). Coral reefs in the Gulf of Aqaba represent the northernmost limit for coral reefs in the Indian Ocean region. Apart from cold weather fronts and extreme low tides, reefs in the region are subject to few natural disturbances. Recently however, northern Red Sea reefs have seen an increase in grazing by the gastropod Drupella (Ginsburg, 1994). 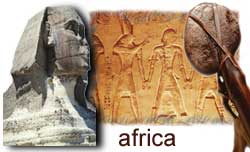 The marine and coastal zones of Northern Africa support tourism, fishing, and petroleum industries. The significant onshore and offshore oil and gas deposits in the sub-region are the mainstays of countries’ economies, providing opportunities for export and employment. Coral reefs are widely spread and well developed in the Red Sea, with 194 species of coral and at least 450 common reef-associated species. These are also some of the most northerly located coral reefs, and have many endemic species. Mangroves are found along the southern Red Sea coast, and are important sources of molluscs, crabs, shrimp, fish, and raw materials for construction, animal fodder, and fuel. They are also important nesting sites for migratory waterbirds. Sea grasses are also fairly common along the southern Red Sea, and rare or protected species such as turtles and dugongs add to the species richness and diversity that attracts an estimated one million tourists per year to the region (UNEP 1997).

Exploring the Rich History and Culture of Ruse in Bulgaria Located on the right bank of the Danube river, the

September 27, 2021 Comments Off on Bucharest

August 9, 2021 Comments Off on Santorini Greece

August 9, 2021 Comments Off on Olympia Greece

August 3, 2021 Comments Off on Oranjestad Aruba

August 3, 2021 Comments Off on Hawaii Honolulu

September 13, 2017 Comments Off on Powerscourt Waterfall

The Cliffs of Moher

September 13, 2017 Comments Off on The Cliffs of Moher