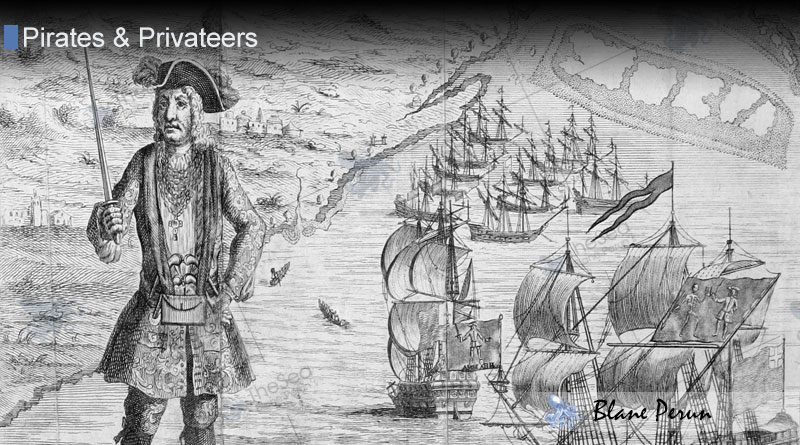 If the number of vessels taken is any measure of a pirate’s success during the golden age of sail, Bartholomew Roberts tops the list. This Welshman, born in 1682, took more than 400 ships during his three years as a pirate off the coast of the Americas and West Africa. He is known to have first began sailing at the age of 13, but a further appearance in the historical records of the time did not occur until 1718, at the age of 36.

While working on a slave ship under Captain Abraham Plumb off the coast of present-day Ghana, Bartholomew Roberts was captured by pirates and forced to work for his new employers. The pirate captain Howell Davis, also a Welshman, took to consulting Roberts for his capabilities as a navigator, as well as confiding in him in their native Welsh language, which allowed important information to be passed secretly without the predominantly English-speaking sailors interception. During an attempted kidnapping on the island of Principe, Captain Howell was shot dead and a new pirate captain had to be elected for the ship once they had escaped.

Now endowed with his own ship and crew, Bartholomew Roberts went back to Principe to avenge his captain’s death. After ambushing the city and plundering it for its valuables, the new captain waited off the coast of Brazil for nine weeks before happening across a Portugese merchant fleet of 42 ships awaiting armed escort. Roberts seized the opportunity and began his lucrative career as pirate captain for the next three years in which he amassed a fortune that would surpass $35 million equated in modern financial terms.

During his tenure as famous pirate captain, Bartholomew Roberts adhered to 11 popular rules by which he managed his pirate enterprise. This came to be known as the pirate’s code, and became widely adopted by the pirate captains who came after him. His good fortune came to an abrupt halt when faced with a clever feint by the HMS Swallow in 1722. The pirates believed they were taking another merchant ship, but the Swallow was in fact a military vessel that scattered Robert’s fleet and took down his ships in the ensuing battle. Robert was killed by grapeshot and his body thrown overboard as per his wishes before the battle ended.