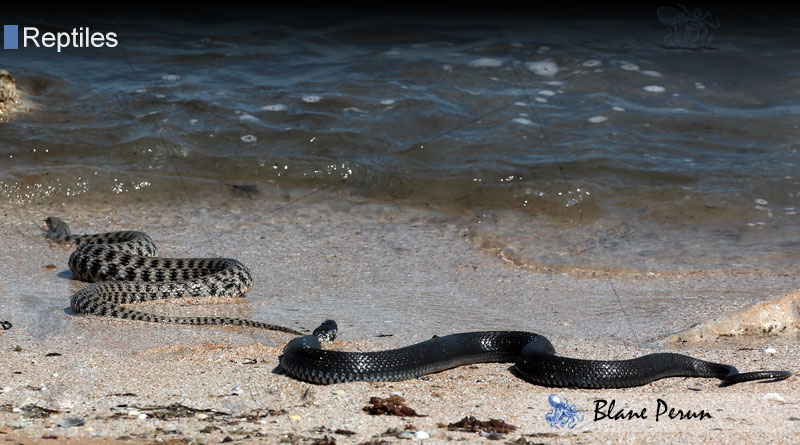 Beaked sea snakes, also known as hook-nosed sea snakes or common sea snakes, are among the deadliest marine creatures in the entire Indo-Pacific region. Found mainly in the Arabian Sea, in the Persian Gulf, in the seas around Bangladesh, Pakistan and India, around Australia, New Guinea, Myanmar, Vietnam and Thailand, as well as around Seychelles Islands and Madagascar, these snakes are about 1.2-1.5 meters long and they were named after the characteristic, beak-like nostrils on the front of their head. Beaked sea snake’s venom is four times deadlier than a cobra’s – the killing power of the bite, paired with the aggressive behavior of the animal, makes the beaked sea snake a dreaded inhabitant of the coastal areas.

The venom released by the beaked sea snake contains highly potent toxins, notably myotoxins and neurotoxins. Myotoxins are peptides that cause muscle paralysis in order to prevent the escape of the prey. The paralysis progresses quickly, leading to the death of the prey when it reaches the diaphragm. The neurotoxins, on the other hand, act by causing damage to the nerve tissues. The average yield of venom released by a beaked sea snake in one bite is between 7.9 – 9.0 mg, the deathly dose being around 1.5 mg. By comparison, the lethal dose of cobra venom for humans is between 18 and 45 mg.

The bite of the beaked sea snake is usually felt, but not painful, with the teeth marks visible, but without any swelling or redness. The snake has 4 mm long fangs and multiple non-fang teeth, so there are usually multiple bite marks on the victim, too. The paralysis appears within 6 hours from getting envenomed, usually preceded by weakness and muscle pain.

The bite of the beaked sea snake is lethal, but only if the antidote is not administered in due time. There are polyvalent antidotes that work against multiple venom types and monovalent antidotes developed especially against sea snake venom. All types of antidote come in the form of injections to be administered intravenously – if the treatment is started early, one ampule might be sufficient, but, in later stages or in very severe cases, it might be necessary to administer 3 to 10 vials. There is a risk that the bite victim might have an adverse reaction to the antivenin itself, so it is very important to be prepared to treat these adverse reactions, including anaphylactic shocks.

Most patients treated with antivenin develop a condition called serum sickness a few days after the treatment, the effect being more severe in the case of patients who have received antivenom treatment before. The symptoms include joint pain, rashes and fever, and they are treated effectively with steroids. Sometimes, the prophylactic administration of steroids is recommended even if there are no signs of serum sickness, especially if the patient was given high doses of the serum.