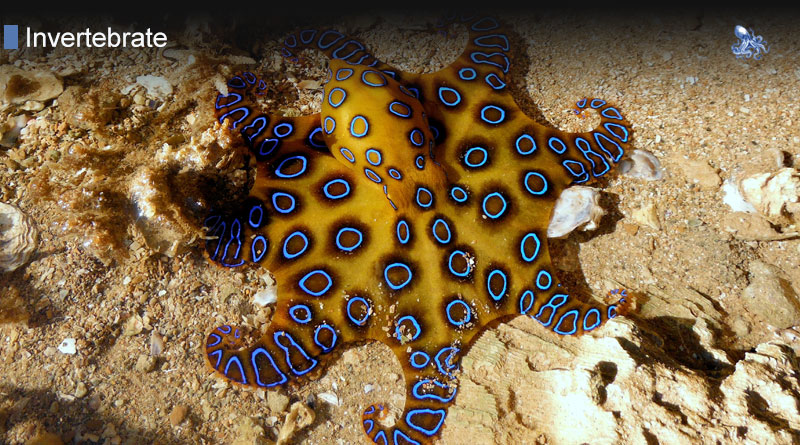 The designation blue ringed octopus is a genus that comprises three or four species of octopods – large mollusks that have four pairs of arms distributed symmetrically around the large head. The members of this particular genus, common in coral reef areas, in the Indo-Pacific region, not only bear the characteristics of octopi, but they also have special features of their own: yellowish skin covered by 50-60 black and blue rings that are concentrated in the lateral and the dorsal part of the mantle and which become more conspicuous and start pulsating when the animal feels threatened.

Blue ringed octopi are small, usually measuring around 12-20 cm. They are docile creatures that spend most of the time hidden in crevices. They are also the masters of camouflage – the chromatophore cells in their skins allow them to change color rapidly to blend into any environment and they can also change shape, a quality that allows them to climb through the smallest cracks.

Despite their peaceful nature, they are also known as one of deadliest creatures of the sea. When provoked, they release a neurotoxin called tetrodotoxin, which is dangerous for humans, too – the venom carried by a single individual is, in fact, sufficiently potent to kill 26 people.

These colorful critters are carnivores, feeding on shrimps, crabs and other small crustaceans. They seize their victims with their strong tentacles and they draw the prey toward their mouth, then they pierce the shell of the victim with their beak and release their poison directly into the victim’s body, paralyzing and killing it.

Blue ringed octopi are sexually dimorphic. Their mating ritual starts with the male grabbing the female, then it continues with the male transferring his sperm sacs into the body of the female with the help of his modified arm. The process continues until the female decides that it should stop. The female lays eggs only once during her lifetime – it is usually a clutch consisting of around 50 eggs. She lays her eggs and incubates them for about half a year underneath her arms. She does not consume any food during the incubation period and she dies soon after the eggs hatch. The eggs of the blue ringed octopus hatch at the end of fall and the young octopi are ready to procreate by the following year.