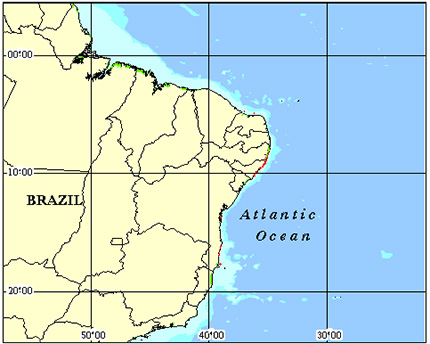 What truly makes the coral reefs of Brazil stand out is their amazing structures, which are significantly different from most known coral formations. Brazilian corals were built by a low diversity of coral fauna remnant from the Tertiary and rich in endemic species. They are also known for their unique initial growth characteristic associated with mushroom-shaped pinnacles known as “chapeiroes.”

Running along the coast of Rio Grande do Norte, this reef, located in the northernmost regions of Brazil is a perfect spot for snorkeling and a beautiful tourist destination. It is essentially a large patch and knoll reef that stretches near the city of Maracajau, about 4 miles off shore.

The Fernando de Noronha coral reef is another important Brazilian formation encompassing no less than 21 islands in the southern part of the Atlantic Ocean, and being the single one of its kind in the entire South Atlantic. The Fernando de Noronha National Park is a protected area where the Brazilian government has limited visits to only 500 per day.

Close to Fernando de Noronha is also the Atol das Rocas coral reef – a protected biological reserve and UNESCO heritage site where tourists are not allowed.

This is quite possibly the most important coral reef in the entire Atlantic Ocean. Housing fish and mollusks even at depths exceeding 200 feet, the Abrolhos Bank reefs contain mushroom-shaped coral species that have disappeared from all the other reef beds in the Atlantic, and newly discovered reefs have shown that the density of marine life in the area is more than 30% higher than in most shallower reefs close to the area.