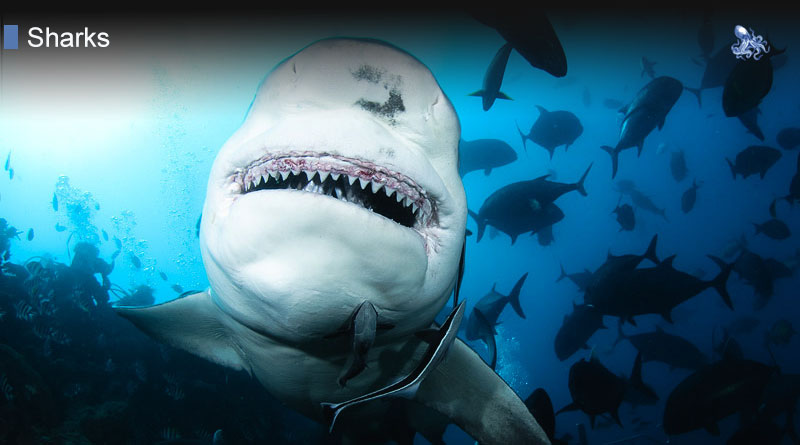 The bull shark is seen as one of the most dangerous predators in the ocean, and counted as one of the four species that are most likely to attack humans. Commonly found in the tropics and around the warmest regions of the world, bull sharks are quite prevalent, and unlike most sharks, they will venture in freshwater regions as well. known among scientists as Carcharhinus leucas, bull sharks have received this name because of their aggressive nature, short, blunt snout and tendency to head-butt their prey before moving in for the kill.

Bull sharks are medium-sized sharks, and even though they don’t compare in size to whale sharks or great whites, they are still quite capable hunters. Some of their most strikingly unique traits include their long pectoral fins that help them remain extremely nimble in the water, as well as their characteristic stout, thick bodies.

Through close observations, scientists have concluded that members of the species are extremely fast and agile predators, and they tend to eat basically anything they find in their path. Bull sharks can weigh up to more than 130 kg, and some of the largest specimens seen were reported to have a length of more than 3.5 meters.

So where is it most likely that you can find a bull shark? The answer is basically anywhere along coastlines and even in freshwater areas. Bull sharks are known to be capable of swimming upriver, and together with their cousin, the tiger shark, they are among the most prevalent large species of sharks found in tropical regions. You can usually spot them near the coasts of western Africa and Brazil, as well as parts of the waters of Mexico, southwest India, Australia, Oceania and the Caribbean. Hi-tech tracking methods have also brought forth reports of bull sharks that have traveled more than 4,000 km up the Amazon river, and other freshwater locations were also found to have been invaded by this extremely aggressive species of shark.

Bull sharks – or Zambezi Sharks, as they call them in most parts of Africa – mainly eat small sharks and bony fish, but like some of its counterpart species, it is known to feed on almost any type of food it can find in the ocean or in the rivers it is usually seen to explore. A solitary hunter, the shark can feed on dolphins and stingrays, and its teeth are also sharp enough to chew up sea turtles or crustaceans. Bull sharks are opportunistic feeders, and they often feed in short bursts, while even being able to slow their digestion and body

This species of shark can easily travel between freshwater and salt water regions, and is considered an euryhaline fish (able to adapt to salt water featuring wide ranges of salinity). Although its freshwater tolerance places it among the most uncommon species of sharks in existence, the bull shark is still most often found near coastlines; its reputation as one of the most aggressive predators in the ocean remains intact, even if its abilities and strength are less impressive when compared to species such as the great white and the tiger shark.