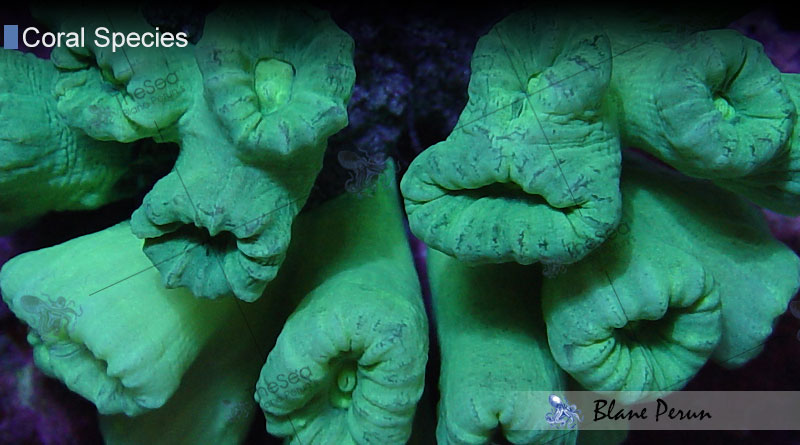 Caulastrea is a genus of stony corals which belongs to the Merulinidae family. These corals are some of the easily recognizable species due to their appearance for which they have also earned the name candy cane, trumpet or bullseye corals.

The candy cane corals form branching colonies that can reach up to 5 meters in diameter. Each branch has a single or double head. It is due to the form of the septa or small channels inside the corallite body that these have gained their name, as the heads resemble peppermint or candy cane. Polyps are either single or grouped in two, with the shape being round or oval most of the times. In some species, such as C. furcate, the polyps are not group tightly as with other species. Polyp colors vary wildly from one species to another and even within the same species depending on habitat. Some polyps are green, yellow or even red, with the center being almost always of another color as the rest, an aspect which further resembles peppermint.

As with many other stony large polyp corals, these can be generally found in the Indo-Pacific region. C. species can be found from the coasts of Maldives to Fiji or Australia and its Great Barrier Reef. Colonies can also be found off the west coast of Thailand. Habitats include protected reef slopes, lagoons and sometimes colonies can be found at depths of up to 30 meters.

Some of the most common Caulastrea species are C. furcata and C. curvata. C. furcata has a closer resemblance to candy cane than the latter. Polyps are usually no more than 10 mm in diameter. In some cases, zoanthids can grow between the polyp heads. C furcata can grow in colonies reaching 5 meters in diameter. Colors are usually bright and contain some form of fluorescent green. C. curvata has irregularly shaped polyps with their septa being exaggerated at times and differently colored and earning them the name bullseye corals.

Most Caulastrea species get their food from the symbiotic zooxanthellae. These are small single-celled protozoans that need light to produce organic carbon through photosynthesis. The corals provide these zooxanthellae with support and allow them to reach closer to the water surface where the light is more abudtant, and in return they get carbohydrates and nitrogen, sometimes in quantities that cover as much as 90 percent of their energy needs. For supplementation or in cases where the corals are found and lower depths, they can feed by actively catching small zooplankton with their tentacles. These have tiny cells called nematocysts that can paralyze the prey which is then introduced through the polyp mouth and digested in its sac.

Reproduction is asexual or sexual. Asexual reproduction is normally achieved through intratentacular budding, during which the polyp divides into two polyps, and fragmentation. Sexual reproduction occurs during mass spawning events, when the hermaphrodite Caulastrea polyps release gametes which will become planula and then polyps that can form new colonies.