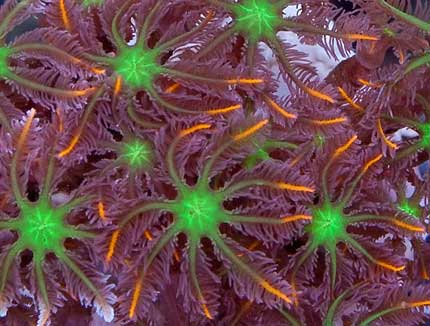 Clavularia is a genus of soft corals which belong to the Clavulariidae family. These are also commonly known as palm tree polyps or glove polyps due to the feathery appearances of the tentacles in some species.

These corals get their name from the polyp tentacles which are sometimes surrounded by tiny structures called pinnules. These encrusting corals are flat and connected through stolons in a structure with resembles a mesh. Each polyp is housed in a tubular calyx or tube which can be 1 to 5 cm tall. Polyps can completely retreat into the base of their calyces. The polyps have 8 tentacles, which are covered in feathered pinnule. The polyps have diverse colors ranging from green, purple to cream and pink.
Clavularia species resemble Anthelia species and they are often confused with the latter. However, palm tree polyps can retract completely into the calyx base, exposing the closed coralitte heads, while, in the case of Anthelia species, the end of the tentacles can still be seen since the polyps cannot retreat entirely.

Palm tree corals can be found in the Indo-Pacific region. There is also one species which inhabits the Atlantic Ocean, namely C. modesto. The habitat of these corals is mostly varied, with common places such as back reef slopes or rubble zones being abundant.

The genus has been described for the first time in 1930. There are at least 40 described palm tree corals, with the most notable ones being C. viridis and C. crassa.
C. viridis has stolons which form mesh structures. The polyps are relatively large compared to many other species, with sizes reaching 5 centimeters or more in diameter in some cases. The retractable polyps are usually fluorescent green, with feathery margins on their 8 tentacles, making them resemble palm trees. This species can be found at depths up to 19 meters.
C. crassa forms colonies that can contain up to 50 individual polyps. These can grow to 10 mm in length and 2 mm in diameter. The eight tentacles are feathery and they are either transparent or they are colorless with white speckles. These grow to depths from 1 to 33 meters. This species can only partially retract its polyps, as opposed to C. viridis and many other species.

Clavularia species normally get their nutrients from their symbiotic unicellular protists called zooxanthellae. These produce carbohydrates through photosynthesis in exchange for an elevated position and protection. These corals can also catch small planktonic organisms with their extended tentacles. They can also filter dissolved organic compounds from the water column.

These corals can reproduce asexually through budding or fragmentation, or sexually. The species release eggs and sperm which form free-swimming larvae called planulae. C. viridis usually release large amounts of gametes in November, several days after the full moon, with the fertilization occurring externally. In the case of Clavularia crassa, the brooding occurs in late June, with the eggs being released through the polyp mouth and forming orange clusters on the exterior.