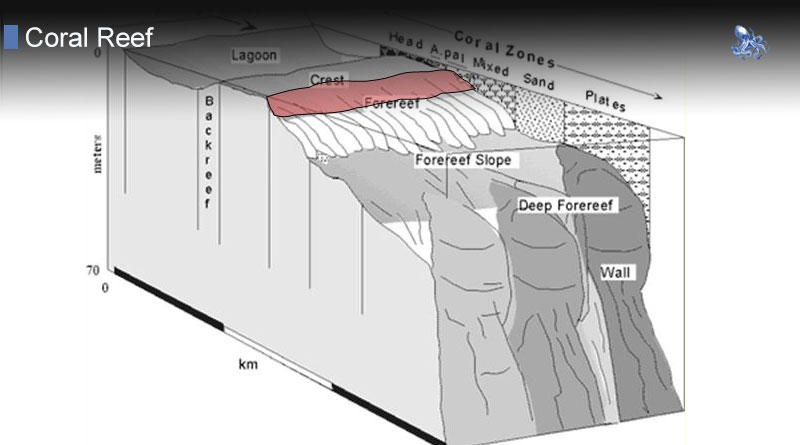 Six main reef zones can be identified almost in the case of all coral reef formations that can be studied. Although variations in size, shape and ecosystem biodiversity may apply depending on the geographic areas in question and animal, coral and plant life species forming the food web, the existence of these zones is essential to the survival and long term thriving of coral colonies.

As we explore any coral reef, starting from the shoreline and moving out toward the open ocean, each drop or increase in elevation can tell us a great deal about the structure of the reef in question, as well as its development and the species of animals or plants that live in these areas.

The reef zones themselves are as follows:

Depending on the type of reef we’re looking at, lagoons may not be present – for instance, in the case of fringing reefs – and the reef flat or the forereef can sometimes extend seaward for several miles before the next change in elevation, offering significant information about the age and size of the reef formation.

When studying coral reef zones, one will find that different species of coral and plant life have evolved to survive in some zones, while they can’t be found in others. Many fish that thrive on the calm areas of lagoons and depend on the back reef’s lush seagrass would not be able to survive on the harsher environment of the upper fore reef and deep reef.

At the same time, many unique coral polyps and colonies have been found at depths where sunlight is scarce, and even less hospitable reef zones such as the reef crest house certain types of animals that have found refuge in certain areas below the waves.