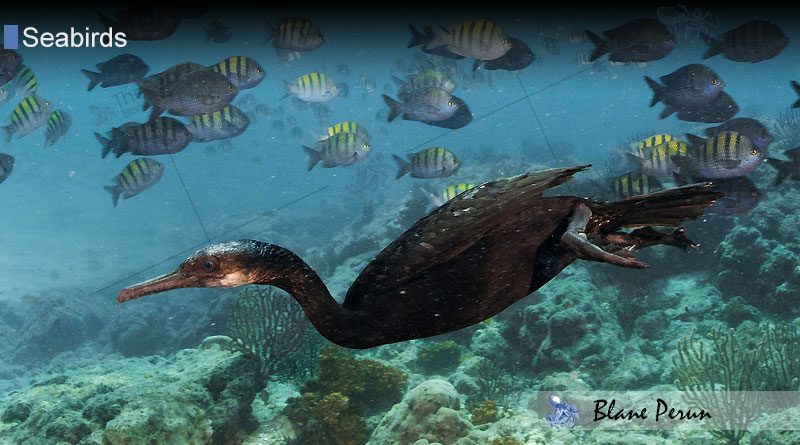 Cormorants are large, long-necked, migrant water birds found in numerous habitats from Alaska to Mexico, from Europe to Asia and Africa. There are only two continents where cormorants are not found: the Antarctica and South America. The term cormorant actually refers to about 40 different species of aquatic birds, most of them marine species, but some preferring fresh water habitats.

Adult cormorants weigh between 2.5 and 3 kilos on the average. They are about 80-95 cm long from tail to beak, with a wing span of about 75 cm. Males are a few hundred grams heavier than females, but they otherwise look identical in terms of feather coloring and shape. Both males and females have dark feathers, a long and thin beak that ends in a hook, and they all have relatively short, very strong legs with four fingers joined by webbing to enable them to move underwater at impressive speed. Their wings are short compared to other marine bird species because they catch their food diving under the surface of the water and they need an ergonomically shaped body to be able to move swiftly under the water. Their short wings make them clumsy during take-off from the surface of the water, but when already airborne, cormorants are powerful and very graceful flyers, able to cover as much as 600 km a day without stopping, at average speeds of over 50 km/h.

With their long, thin and curved beak and their muscular, aerodynamic body, they are extremely good swimmers and hunters – according to scientists, cormorants snag fish over 100 feet below the surface, catching their pray not only on the surface of the water, but deep down as well. These water birds are not choosy when it comes to fish – they eat whatever they can catch. They migrate and cover large distances; therefore, they are very adaptable in terms of diet – they have to be. An average adult cormorant needs about half a kilo of fish a day, but chicks need more, usually between 380 and 630 grams a day. This means that an adult pair raising their young need to catch around 2 kilos of fish a day just to feed the chicks, plus the amount they need to stay in shape.

They usually build their nests among rocks and cliffs along the coastline, but cormorant nests can be found in trees as well. The female usually has 3-5 eggs. Cormorants form the largest colonies of all birds, sometimes as large as 4,000 individuals.

Cormorants are an ancient group of species, their “history” reaching back to dinosaurs;
Cormorants are quite long-lived, their maximum age being around 24 years;
The largest colony of cormorants was registered in Ukraine in 2006 – it had over 14,000 nests;
Cormorants are often seen sunbathing on rocks or cliffs with their wings stretched – they adopt this characteristic posture to dry their wings after hunting underwater, because their feathers absorb water during the dives to make it easier for them to move under the surface of the sea.

Knowing all this, aren’t these birds absolutely marvelous?