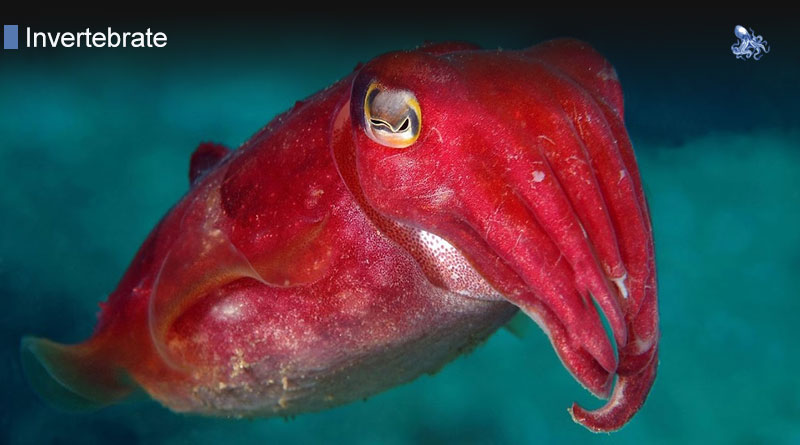 The Cuttlefish, also called sepia, is a family of over one hundred amazing species that bear a misleading name: these strange-looking critters are in fact not fish, but mollusks. Widespread not only in the shallow waters of the Mediterranean and along the coast line of Asia and Western Europe, but also encountered at depths up to 600 m, these mollusks are hardy and adaptable – they are able to change color to blend into their environment and they can also modify their shape and the texture of their skin for even more efficient camouflage.

Cuttlefish generally vary in size between 15 and 25 cm, but the largest species in the family can grow to 50 cm in length and can weigh over 10 kg. They all have eight arms and two tentacles equipped with suckers to keep their prey in a fixed position. Their heads are very large – in fact, these creatures have one of the largest brain to body ratio among marine invertebrates. Besides their ability to change color, shape and skin texture, they have lots of other amazing features: they are able to control their buoyancy with the help of the cuttlebone (the porous internal shell they are named after) and they are known as one of the most intelligent creatures of the sea, not only able to cloud the vision of predators with the help of the dark-colored ink that they release when attacked, but also releasing a second cloud of mucus to further distract the enemy.

Sepia species are on a diet of fish, shrimps and small fish. They use their mimicking abilities not only to protect themselves against predators, but also to capture their prey – they would camouflage to blend into the sandy sea bed, then they would sneak up on their victim, grabbing it with the two tentacles. The suckers on the tentacles draw the victim towards the sepia’s beak that releases venom to paralyze the victim.

Sepia males are very competitive – they engage into conflicts for power as well as for the best lair. However, in most cases the conflicts do not involve physical contact – the animals threaten each other, then one of them simply leaves and the winner gets to mate with the female. During mating, the male grabs the female with his tentacles and turns her face to face, then he inserts his sperm sacs into the body of the female using the tentacles again. The male will stay with the female until she lays her eggs – usually several hundred eggs within the course of only a few days. The incubation lasts for about two months and, when the eggs hatch, the emerging juvenile cuttlefish already look like tiny adults, able to sustain themselves, but they reach adulthood only about 18-22 months later.