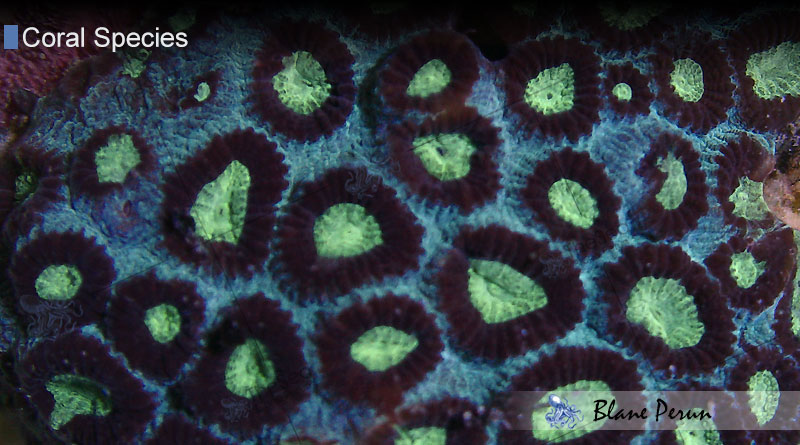 Favites are a genus of stony corals which belong to the Merulinidae family. These share characteristics with the Goniastrea genus, with the notable difference that their corallites share the same wall while the latter have separate walls.

These corals usually form colonies shaped as domes. Size varies from one species to another, with some colonies being more than 1 meter in diameter. The colonies are usually brightly colored, with colors ranging from brown, cream or yellow mixed with slightly red or orange tones. Favites are sometimes confused with Goniastrea. However, the former species are cerioid, meaning that they share the same corallite wall which is fused, a characteristic which can be seen when the polyps are recessed during the night. However, at night these corals extend their tubular tentacles which are used for feeding. These tentacles form single rows around the calices or centers of the corallites. The size of the calices ranges from one species to another, measuring from 7 mm in diameter to over 13 mm.

These corals can be found in many parts of the Indo-Pacific region. There are 23 described species, with 15 of them being considered true species. Almost half of these species can be found on the North, East and West Coast of Australia. They can also be found in the Red Sea and as far as the Southern tip of Africa. Several species also inhabit water extending to the North of Japan and well to the east of Pitcairn Islands.
These corals live in diverse habitats and at different depths. The lighting conditions keep them in mostly shallow waters due to the need of the symbiotic zooxanthellae for photosynthesis. Many coral colonies live in moderately turbulent water which carries nutrients and oxygen.

Most of the energy needs of Favites is obtained indirectly from the zooxanthellae that live within them. These tiny single cell organisms produce organic carbon and deliver it along with nitrogen, sometimes making up to 90 percent of the energy the host needs. Some pigments produced by the zooxanthellae are also responsible for the mixed colors seen in polyps. Polyps supplement their needs by extending their tentacles at night and capturing mostly planktonic organisms as well as food particles that can be found in the water column.

These coral species are hermaphrodites, which means that both sex organs can be found within a single polyp. They can reproduce sexually as well as asexually. The sexual reproduction is achieved during mass spawn events, during which both eggs and sperm are released into the water. Contrary to other corals, the fertilization is external in this case, and thus the newly formed planula larvae are extremely vulnerable, and few survive. The free-swimming larvae settle down, turn into a polyp which will form a new colony. Asexual reproduction can be made through extratentacular budding, fragmentations, and, in some cases, polyp bailout. Fragments of the Favites colonies can establish colonies themselves or, in cases of extreme conditions, some polyps may detach themselves from the colony and create new ones in other areas.