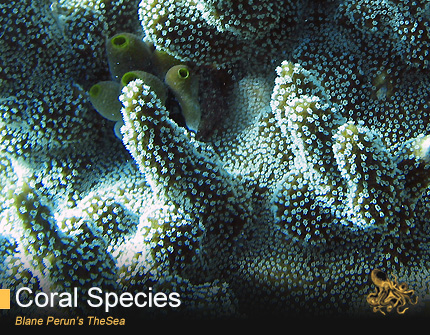 Finger leather coral is a soft coral member of the Alcyoniidae family, and one of over 100 species in the genus Lobophytum. Originating in the Tropical Indian Ocean and the Pacific Ocean in Indonesia, these leather corals are thick, encrusting species and that has an upward, finger-like outgrowth (i.e. branching and lobed leather corals.)

Comparative to other corals, finger leather corals are only average in size (ranging from 1-2 to 5), but may appear to be many times its size since they grow in groups spaced closely together, forming a patch of on one or more rocks. In general, the coral is shaped like a toadstool- a cap (called a capitulum) that sits atop a thick stalk. The caps surface is smooth and flat with multiple extending fingers called polyps in shades of white and gold, but it is important to point out that the cap will slowly fold as the coral ages. However, the individual appearances of finger leather coral will vary depending on its locations and strength of the ocean currents.

For nutrition, the leather coral depends heavily on the symbiotic algae zooxanthellae that it hosts within its body. The zooxanthellae draw energy from sunlight through the process of photosynthesis, which produces energy that is then delivered to the finger leather coral. Because access to light is crucial to perform photosynthesis, the corals location will be determined accordingly, in areas of the ocean that have access to frequent and regular light. The more access to light the coral is given, the brighter colored the it appears. Secondarily, the coral will obtain nutrients from micro plankton.

Over time, the finger leather coral will accumulate an outside layer of mucus, which is sloughed off by the ocean currents, ridding its body of unnecessary waste and debris. If the coral does not shed this buildup regularly, it may suffer from infection. The coral defends itself through the emission of toxic chemicals to surrounding plants and animals, especially in relation to hard corals. These toxins make this leather coral a semi-aggressive coral, and quite a hardy one- they will adapt quickly and easily to a variety of water conditions and reef locations.

The finger leather coral is asexual, and reproduces through a process known as fission. Pieces of the coral are broken off and each fragment grows into a separate coral.