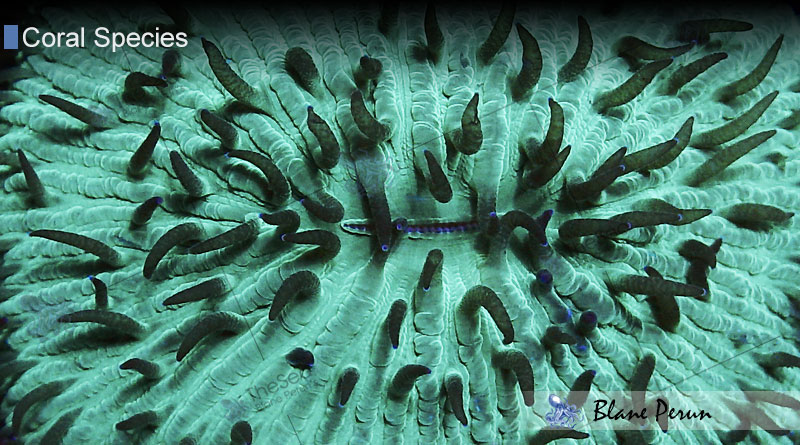 Fungia corals, also known as short-tentacle disc corals or plate corals, are large, flat and rounded solitary corals, widespread in the Western region of the Indo-Pacific.

Fungia corals are round, dome-shaped or elongated and they can grow as large as 12” in diameter when left in their natural habitat. The elongated corals can be easily mistaken for sea cucumbers. They are loners in adulthood – young corals attach themselves to other corals, but mature corals do not form colonies and they do not attach themselves to the substrate or to other specimen either. They have a septa, a vertical, robust, stony element inside the coral’s skeleton that starts at the mouth, a central polyp. They also have characteristic costae that radiate towards the edges. The septa has tiny teeth along the sides, making them look like the blade of a saw.

The corals belonging to the genus use a central polyp for feeding, which is not visible during the day – this feature makes these corals easy to mistake for anemones as well as for corals belonging to other families. The only feature that can be used to identify these disc-like creatures is the teeth, but they are hardly visible during the day because of the tissues that cover them.

Plate corals are extremely varied in terms of coloring – they can be of any color from brown, pink, red, range and purple to any shade of green and there are striped specimen just as much as corals that have the edges colored differently from the body.

These species are among the very few coral species that are able to move on their own – if turned over, they are able to turn back and they are also able to climb and to come out from under sediments.

Fungia corals live and feed through photosynthesis, so their growth rate depends on the amount of light they are able to get. Some species of the genus are carnivorous, feeding on shrimps and plankton that they catch with their tentacles.

All the species belonging to the genus can reproduce by division, but some of them are hermaphrodites as well. They eject sperm and eggs through the mouth, which then combine into larvae that settle and metamorphose. The young corals then attach themselves to the seabed or to other, adult corals, from where they detach later on. When in their juvenile phase, mushroom corals only slightly resemble adult corals – they are almost completely flat, attaining their dome-like shape only after detachment.

When proliferating by means of division, a small piece of coral becomes detached from the body of the mother. The piece will then travel to attach itself to a rock and grow on its own. Fungia corals usually take a long time to recover from mechanical damages such as the ones caused by division, and they will retain a scar after detaching from the rock they have grown on as well.