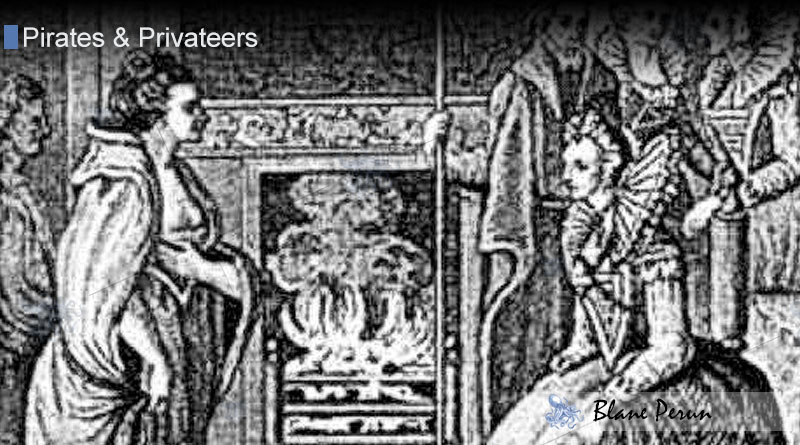 Grace O’Malley was an Irish heiress who inherited and ran her father’s large trading company in the 16th century. She has become a folklore figure in her native Ireland, where she is sometimes called “The Sea Queen Of Connacht”. Under her leadership, the O’Malley shipping business became something of a feudal warlordship that challenged the hegemony of neighboring England. Her clan successfully warded off a number of assaults to their ancestral castle and maintained a heavy protection tax on fishermen within waters that, at some points, reached as far as England.

Grace O’Malley exacted a controversial tax for any shipping or trading that took place within the waters over which she had any degree of control. Usually, a travelling ship would be hailed and stopped by several ships in her fleet, which would demand portions of the cargo or cash as payment for safe passage through their waters. Any captains who resisted paying this tax were treated with violence and even murder. This enraged the British, leading to a confrontation over their influence in the area. This confrontation was almost resolved by O’Malley’s meeting with Queen Elizabeth, but their discussion could not prevent the oncoming Nine Years War between the two nations.

When the English had sent in Richard Bingham as unpopular governor of Connacht, O’Malley remained one of his fiercest and staunchest opponents. She helped to organize a number of rebellions throughout several decades of resistance to English influence in the area, and made a sizable impact on the ability for the invaders to govern the Kingdom of Ireland. Richard Bingham was eventually revoked from service after O’Malley’s visit with Queen Elizabeth, but put back onto the post following the reneging of their agreements with one another.

Because of her exploits in maintaining Irish sovereignty of their homeland, Grace O’Malley is widely considered a folk hero in Irish culture. Artists and musicians continue to dedicate works to her legacy even in the modern day, and statues of her likeness are situated in many major cities, ports and trading centers within her native Ireland. The castles in which she lived and locations of battles that she fought against the English have become popular historical sites attracting tourists year round. The O’Malley clan survives to this day and makes the grand Westport House in Ireland their home.