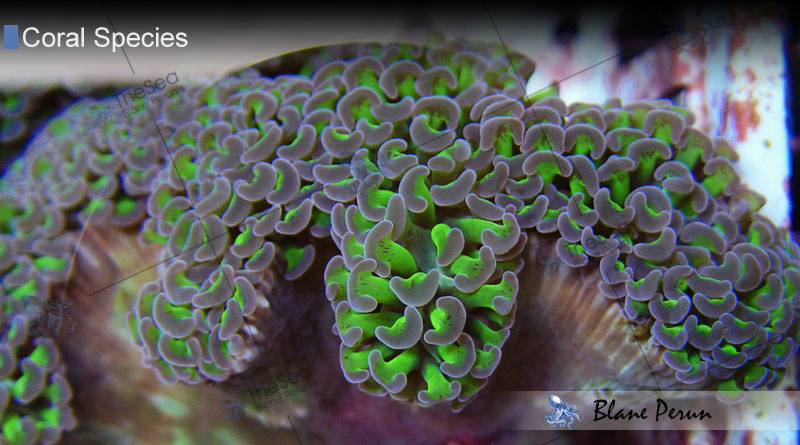 Euphylla Ancora, also known as Hammer Coral, Ridge Coral, Hammerhead or Anchor Coral, is a large polyp stony (LPS) coral. Its common names are derived from the appearance of its hammerhead or anchor-shaped tentacles. Its polyps are visible throughout both day and night and hide its skeletal base. They breed via fission, which is a form of asexual reproduction and each resulting fragment produced is capable of growing into an individual.

Hammer coral may be green, tan or brown in color, with lime green or yellow tips on the ends of its tentacles, which glow under actinic lighting. Some varieties of hammer coral may be branched, which makes them look similar to Torch Coral. They can appear semi-transparent when well expanded.

Coral colonies may form continuous cover over the substrate many meters across, although individual colonies are seldom over mone meter across. Large colonies are usually found in shallow environments exposed to moderate wave action. Colonies do well within a range of at least 75 to 84 degrees.

Keeping Hammer coral in a saltwater aquarium is not recommended for those new to the hobby. This is mostly because their delicate nature makes them rough shippers. Hammer corals have sharp skeletons that are covered in extremely thin tissue, which is inevitably easily scuffed by shipping. All Euphyllia should be given plenty of room to expand in an aquarium setting. Sweeper tentacles extend several inches at night and can sting other corals.

The coral can expand considerably from its skeleton and has sweeper tentacles that are up to 2″ longer than normal tentacles that can sting its neighbors. Hammer corals grow fairly quickly and to a large size. It is photosynthetic and does not need to be directly fed, but will take small meaty foods if offered. Hammer coral is aggressive toward the other marine aquarium invertebrates.

Euphyllia coral, or Hammer Coral, originates in the Indo-Pacific islands including Figi, the Great Barrier Reef, Tonga and the Solomon Islands. It is also found, though not so commonly, in shallow water on Lagoon Reefs in the Indo-Pacific region. They are a favorite to see amongst SCUBA divers and snorklers in their natural habitat, due to their delicate nature and beauty.